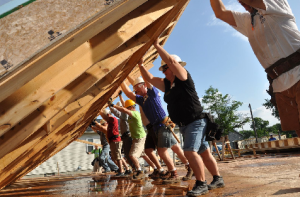 Acts 3:19–21 is an important passage in the eschatological debate. I have treated this passage on a previous occasion, but continue to get inquiries. So I thought it would be good to offer some insights again.

This is a favorite passage for the dispensational and premillennial search for a special future for Israel in the New Testament record. It is thought to establish the premillennial expectation against all others. This passage reads:

“Therefore repent and return, so that your sins may be wiped away, in order that times of refreshing may come from the presence of the Lord; and that He may send Jesus, the Christ appointed for you, whom heaven must receive until the period of restoration of all things about which God spoke by the mouth of His holy prophets from ancient time. (Acts 3:19–21)

‟But Heaven has only received Him until the time of restitution of all things which God hath spoken by the mouth of all holy prophets (Acts 3:21), when He shall come again, to sit in the throne of His Father David. This again proves His coming to be pre-millennial.” [1]

‟The king is ‛exiled’ in heaven (Ac 3:20-21; 7:55-56). . . . Scripture everywhere repudiates and disproves the doctrine that Christ is now reigning as Prince of peace, seeking through the church to extend His kingdom on earth by means of the gospel.” [2]

‟The declaration is that, if the nation repented and believed, the Messiah would return and establish the promised kingdom.” [3]

‟Acts 3:17-21 shows that Israel’s repentance was to have had two purposes: (1) for individual Israelites there was forgiveness of sins, and (2) for Israel as a nation her Messiah would return to reign,” i.e. in the Millennium. [4]

Amillennialists, of course, hold a fundamentally different conception: ‟Surely the words ‛the times of restoration of all things’ refer not to an intermediate millennial interval but to the final state.” [5]

A preteristic-postmillennial understanding of this passage is more satisfying than either of these views in that it recognizes the over-arching Jewish context in light of covenantal expectations.

Israel in the Bible and History (9 mp3 lectures)

by Ken Gentry
The people of Israel are the people of God. But the modern church is divided over the nature, call and identity of Israel. This lecture series covers key issues for understanding the biblical concept of Israel.

In the context we must recognize (with the dispensationalist) that Peter is preaching a message most relevant to the Jews of that day: He opens with ‟Ye men of Israel” (Acts 3:12), emphasizing their lineage from ‟Abraham, Isaac, and Jacob” (3:13a). They are the ‟sons of the prophets” and the sons of ‟the covenant” (3:25). These highly favored people were guilty of crucifying the Messiah: ‟God . . . glorified His Servant Jesus, whom you delivered up and denied in the presence of Pilate, when he was determined to let Him go. But you denied the Holy One and the Just, and asked for a murderer to be granted to you, and [you] killed the Prince of life, whom God raised from the dead, of which we are witnesses.” ‟Yet now, brethren, I know that you did it in ignorance, as did also your rulers” (Acts 3:13b-15, 17).

Keeping this in mind — along with some additional contextual notations to follow — let us now seek to gain the proper understanding of Peter’s statement.

After pointing out their guilt in the crucifixion of Christ, Peter notes God’s sovereign prophetic ordering of the event (Acts 3:18). Then he exhorts these guilty crucifiers of Christ to ‟repent therefore and be converted, that your sins may be blotted out” (3:19a). In essence, Peter urges: ‟Let them repent, for their vast evil has not frustrated God.” [6] This call to repentance from their sins contextually speaks of their horrible guilt in the crucifixion. With an eye to the coming A.D. 70 judgment, he issues a warning from Moses: ‟And it shall come to pass that every soul who will not hear that Prophet shall be utterly destroyed from among the people” (Acts 3:23). This is reminiscent of his previous allusion to the ‟blood, fire, and smoke” threatened upon Jerusalem and his urging of his Jewish auditors to ‟be saved from this perverse generation” (Acts 2:19-21).

But where is this leading? I will focus on this in my next article.

Tagged: Acts 3:21, restoration of all things