U. S. CHRISTIANITY NOT SHRINKING 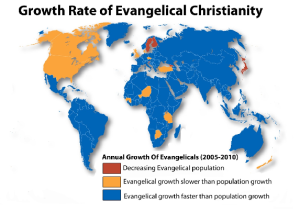 Is churchgoing and religious adherence really in ‘widespread decline’ so much so that conservative believers should suffer ‘growing anxiety’? Absolutely not.

“Meanwhile, a widespread decline in churchgoing and religious affiliation had contributed to a growing anxiety among conservative believers.” Statements like this are uttered with such confidence and frequency that most Americans accept them as uncontested truisms. This one emerged just this month in an exceedingly silly article in The Atlantic on Vice President Mike Pence.

Religious faith in America is going the way of the Yellow Pages and travel maps, we keep hearing. It’s just a matter of time until Christianity’s total and happy extinction, chortle our cultural elites. Is this true? Is churchgoing and religious adherence really in “widespread decline” so much so that conservative believers should suffer “growing anxiety”?

New research published late last year by scholars at Harvard University and Indiana University Bloomington is just the latest to reveal the myth. This research questioned the “secularization thesis,” which holds that the United States is following most advanced industrial nations in the death of their once vibrant faith culture. Churches becoming mere landmarks, dance halls, boutique hotels, museums, and all that.

Not only did their examination find no support for this secularization in terms of actual practice and belief, the researchers proclaim that religion continues to enjoy “persistent and exceptional intensity” in America. These researchers hold our nation “remains an exceptional outlier and potential counter example to the secularization thesis.”

What Accounts for the Difference in Perceptions?

How can their findings appear so contrary to what we have been hearing from so many seemingly informed voices? It comes down primarily to what kind of faith one is talking about. Not the belief system itself, per se, but the intensity and seriousness with which people hold and practice that faith.

Mainline churches are tanking as if they have super-sized millstones around their necks. Yes, these churches are hemorrhaging members in startling numbers, but many of those folks are not leaving Christianity. They are simply going elsewhere. Because of this shifting, other very different kinds of churches are holding strong in crowds and have been for as long as such data has been collected. In some ways, they are even growing. This is what this new research has found.

The percentage of Americans who attend church more than once a week, pray daily, and accept the Bible as wholly reliable and deeply instructive to their lives has remained absolutely, steel-bar constant for the last 50 years or more, right up to today. These authors describe this continuity as “patently persistent.”

The percentage of such people is also not small. One in three Americans prays multiple times a day, while one in 15 do so in other countries on average. Attending services more than once a week continues to be twice as high among Americans compared to the next highest-attending industrial country, and three times higher than the average comparable nation.

One-third of Americans hold that the Bible is the actual word of God. Fewer than 10 percent believe so in similar countries. The United States “clearly stands out as exceptional,” and this exceptionalism has not been decreasing over time. In fact, these scholars determine that the percentages of Americans who are the most vibrant and serious in their faith is actually increasing a bit, “which is making the United States even more exceptional over time.”

This also means, of course, that those who take their faith seriously are becoming a markedly larger proportion of all religious people. In 1989, 39 percent of those who belonged to a religion held strong beliefs and practices. Today, these are 47 percent of all the religiously affiliated. This all has important implications for politics, indicating that the voting bloc of religious conservatives is not shrinking, but actually growing among the faithful. The declining influence of liberal believers at the polls has been demonstrated in many important elections recently.

These Are Not Isolated Findings

The findings of these scholars are not outliers. There has been a growing gulf between the faithful and the dabblers for quite some time, with the first group growing more numerous. Think about the church you attend, relative to its belief system. It is extremely likely that if your church teaches the Bible with seriousness, calls its people to real discipleship, and encourages daily intimacy with God, it has multiple services to handle the coming crowds.

Most decent-size American cities have a treasure trove of such churches for believers to choose from. This shows no sign of changing. If, however, your church is theologically liberal or merely lukewarm, it’s likely laying off staff and wondering how to pay this month’s light bill. People are navigating toward substantive Christianity. . . .

2 thoughts on “U. S. CHRISTIANITY NOT SHRINKING”