I became a postmillennialist after becoming dismayed with dispensationalism, while studying at Grace Theological seminary. But I did not leap from dispensational despair to postmillennial progress in a single bound. Nor was my move faster than a speeding bullet. Nor did I deem it necessary to wear a red cape to do this. (I’ll see how many of you watched Superman on TV in the 1950s.)

I was converted in a dispensational ministry: my dispensationalist uncle’s church in Chattanooga, Tennessee. Then I enrolled in Tennessee Temple College, a fundamentalist Baptist operated school, where I secured a B.A. in Biblical Studies. Now armed-and-dangerous with dispensational proof-texts, I set sail to Grace Theological Seminary in Winona Lake, Indiana. There I was being trained in a higher level, more scholarly version of dispensationalism.

But something did not click for me. I began seeing problems with the system, and longed for something less complicated, more clear, and more biblical. In the GTS library I stumbled upon O. T. Allis’s Prophecy and the Church. And that did it. I raptured out of dispensationalism. And never looked back (except to pick up my hat — it was snowing that day).

I have often called amillennialism the “parking lot” of eschatology. It is a comfortable place to get away from the eschatological debate and the heavy traffic it generates when you have “no particular place to go” (pardon me, Chuck Berry). As an amill you are not in a fast lane going north or going south. You are just sitting there conserving energy (and dreaming that one day you too may be Dutch).

Yet while at Reformed Seminary, I took a class called “Eschatology and History” which was taught by Dr. Greg L. Bahnsen. He was not Dr. Bahnsen then though. He was Joe Cleveland. Just kidding. He was in process of getting his doctorate, so he did not have his Ph.D. yet. He was simply “Mr. Bahnsen.” (But his doctorate did not bestow enormous intelligence on him. He already had it, which allowed him to take all of his Ph.D. exit exams in just one week!)

Through the first few weeks of the class I resisted him. I “kicked against the goads,” you might say. But Bahnsen could be very persuasive, bringing pretty big goads against you. He was armed with a great command of the Bible and theology, as well as keen skills in logical persuasion. (And he would often throw in a little rhetoric, just for fun.) Before the semester was out: I had overhauled the ole Gentrymobile, exited the amill parking lot, and entered into the postmillennial fast lane to the future. And the rest, as they say, is aluminum foil. (Well, not many people say, that. Most will say “the rest is history,” but I like to mix things up a bit.)

Now the question arises: What verses were most influential in persuading me? Just to pick two passages from each testament, I would say in the Old Testament Psalm 72 and Isaiah 2 greatly impacted my thinking. Then in the New Testament the Kingdom Parables (Matt 13//) and the great commission (Matt 28:18-20) did the trick.

The Truth about Postmillennialism 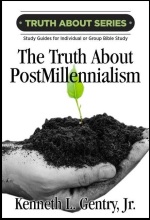 A group Bible study guide for explaining the optimistic prophetic hope for this world to be accomplished before Christ’s Second Coming. Establishes the postmillennial system in both the Old and New Testaments. Touches on key eschatological issues, such as creation, covenant, interpretive methodolgy, the great tribulation, the Book of Revelation, the Jewish Temple, and more. It presents and answers the leading objections to postmillennialism.Twelve chapters are ideal for one quarter of Sunday School.

In Psalm 72 we learn of Christ’s ruling “from the River to the ends of the earth” (Psa 72:8). And we learn that this will occur before the consummational conflagration (2 Pet 3:10-12) that produces the new heavens and new earth, because he will reign “till the moon is no more” (Psa 72:7).

In Isaiah 2 we see that God’s righteousness and peace will come with the exaltation of his kingdom “in the last days” (Isa 2:2). That is, during the last days we will witness “many peoples” streaming into the kingdom of God where they will taught God’s ways (Isa 2:2-3). Then eventually this will issue forth in worldwide peace (Isa 2:4).

This is the foundation to the New Testament hope, which Jesus promoted — and taught his disciples. In the Kingdom Parables we see that the kingdom will grow incrementally to world dominance (Matt 13:31–33).

The Old Testament hope is also the spark that leads Jesus to give his great commission. In that commissioning Jesus calls his small flock to “disciple the nations” so that they might be baptized and learn to observe all things he teaches us (Matt 28:18–20).

These are not the only verses that lead to the postmillennial hope. In fact, it was hard to reduce my “favorite” postmillennial passages to just two Old Testament and two New Testament passages. My book He Shall Have Dominion: A Postmillennial Eschatology has over 600 pages and deals with hundreds of verses.

But now, I wonder: What verses were most influential in leading you to postmillennialism? I would love to hear from you.

12 thoughts on “MY FAVORITE POSTMILLENNIAL VERSES”