GUMERLOCK’S “REVELATION AND THE FIRST CENTURY” 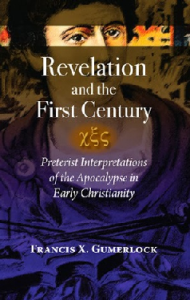 The preterist approach to Revelation holds that Revelation is to be understood as already fulfilled in the first century. Consequently, it has a strong historical interest.

Ironically though, many critics of the preterist approach to Revelation attempt to discredit it on an historical basis. They argue such things as:

“Preterism goes against the witness of the very early church” (Mal Couch).

“Alcazar, a [17th century] Spanish Jesuit, started the idea that the Apostle John . . . was writing about what was happening in his own day, and that his Antichrist was probably the Emperor Nero or some other early persecutor” (Duncan McDougall).

The Early Date of Revelation and the End Times: An Amillennial Partial Preterist Perspective
By Robert Hillegonds

This book presents a strong, contemporary case in support of the early dating of Revelation. He builds on Before Jerusalem Fell and brings additional arguments to bear.

How should the evangelical preterist respond? We must point out that preterism is found early in Christian history. And when we respond thus, we should consult Latin scholar and historical theologian Francis X. Gumerlock. Dr. Gumerlock has established himself as a credible proponent of preterism and an able defender of its historical bearing.

In this article I will provide a brief introduction to his important 2012 book: Revelation and the First Century: Preterist Interpretations of the Apocalypse in Early Christianity. I highly recommend this book for both your historical encouragement and your apologetic defense of preterism in today’s futurist environment.

As Latin scholar and historical theologian Gumerlock is well-equipped to engage the question raised. In his eighteen chapters (plus an Introduction and Conclusion), he ably closes the mouths of those who complain about the unhistorical nature of preterist exegesis.

In his first chapter he engages one of the most important issues in the debate: the early date of Revelation. He cites evidence from ancient writings that demonstrate that “there were at least ten different traditions favoring a date of the book of Revelation before 70 A.D.” (p. 24).

And in doing so he cites modern scholars who have noted this. For instance, he cites Kym Smith’s book Redating the Revelation (2001) who, according to Gumerlock, “conjectured that John wrote Revelation about 62 A.D.” (p. 33).

For anyone interested in preterism, and especially preterism regarding the Book of Revelation, this is a must-have book. I cannot commend it more highly than I do. Gumerlock is your one-stop-shopping for evidence for preterism among the early church fathers. You should buy this book today. If not today, then tomorrow. But if you put it off to the third day, you are a procrastinator who probably did not get a birthmark until you were four years old.

4 thoughts on “GUMERLOCK’S “REVELATION AND THE FIRST CENTURY””