THE SEVEN SEALS OF REVELATION 6 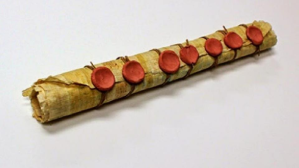 In Revelation 6 Christ begins opening the seals. As Robert Thomas, Marvin Pate, and other commentators note, there is a “close parallelism between Jesus’ Olivet Discourse” and the seals of Revelation. And as the preterist reminds them, the contexts of both of these prophecies relate to first century events (cp. Rev. 1:1, 3; Matt. 24:2-3, 34). Interestingly, church father Eusebius (A.D. 260-340) uses Josephus’s history of the Jewish War (A.D. 67-70) to illustrate the fulfilling of the Olivet prophecy (Eccl. Hist. 3:5-9).

The rider on the white horse “bent on conquest” (Rev. 6:2-3) represents the victorious Roman march toward Jerusalem to engage the Jewish War in the Spring of A.D. 67. The rider on the red horse (Rev. 6:4) who takes “the peace from the earth” (Rev. 6:4; cp. Matt. 24:6-7) speaks of the surprising disruption of the famous pax Romana, an enforced peace that prevails throughout the Roman Empire for many years. For example, Epictetus (A.D. 60-140) writes that “Caesar has obtained for us a profound peace. There are neither wars nor battles” (Discourses 3:13:9). The Jewish revolt against Rome temporarily interrupts this famous peace. The red horse especially highlights that civil war occurring in Jerusalem itself (where Jesus utters his prophecy, Matt. 24).

The riders on the black and pale horses represent famine and death issuing from the Jewish War. These tragic factors of the Jewish War are well-documented by Josephus (Wars of the Jews 4-7), the Jewish historian who participates in the war, and by the Roman historians Tacitus (Histories 1) and Suetonius (Vespasian).

The fifth seal (Rev. 6:9-11) gives a heaven-ward glance once again (cp. Rev. 4), where we hear the martyrs crying for vengeance. God promises to vindicate them, but they must “wait a little longer” (Rev. 6:11; cp. Luke 18:6-8). Martyr vindication is crucial to understanding Israel’s judgment (Matt. 23:34— 24:2). The de-creation language in the sixth seal (Rev. 6:12-17) portrays Israel’s world coming apart under the “wrath of the Lamb” on the “great day of wrath” (Rev. 6:17). Such de-creation language is common prophetic parlance regarding the collapse of God-cursed governments, such as Babylon (Isa. 13:1, 10, 19), Egypt (Ezek. 32:2, 7-8, 16, 18), Idumea (Isa. 34:3-5, and Judah (Jer. 4:14, 23-24). Milton Terry writes of Revelation 6: “the imagery and style of the Old Testament apocalyptists are most appropriately brought into use; sun, moon, and stars, and the heaven itself, are pictured as collapsing, and the crisis of the ages is signaled by voices and thunders and lightnings and earthquake. To insist on literal interpretation of such imagery is to bring prophecy into contempt and ridicule.”

The moving away of “every mountain” may allude to the Roman legions’s construction crews removing mountainous impediments to the progress of the massive army, or to their building banks to the tops of the protective walls surrounding Jewish cities. Josephus notes: “Accordingly [Vespasian] sent both footmen and horsemen to level the road, which was mountainous and rocky, not without difficulty to be traveled over by footmen, but absolutely impracticable for horsemen. Now these workmen accomplished what they were about in four days” (Wars 3:7:3). After describing the mountainous setting of Jotapata and its natural impregnability (Wars 3:7:7), Josephus mentions Vespasian’s decision to “raise a bank against that part of the wall which was practicable” (Wars 3:7:8).

Jesus warns the women watching him carry his cross: “The time will come when you will say, ‘Blessed are the barren women, the wombs that never bore and the breasts that never nursed!’ Then they will say to the mountains, ‘Fall on us!’ and to the hills, ‘Cover us!”’ (Luke 23:29-30; cp. Matt. 24:1-2, 19, 34). The fate of the women and children in A.D. 70 is horrible: “Then did the famine widen its progress, and devoured the people by whole houses and families; the upper rooms were full of women and children that were dying by famine; and the lanes of the city were full of the dead bodies of the aged; the children also and the young men wandered about the marketplaces like shadows, all swelled with the famine” (Wars 5:12:3). The relevant fit of first century events with the prophecy of Revelation 6 is so compelling that Marvin Pate admits their connection, though he rejects the preterist conclusions.