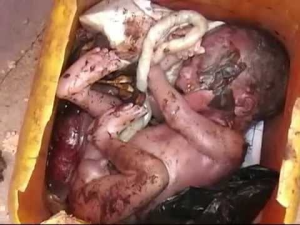 Gentry note: Since the Obama Presidency, America has lurched leftward and become destructively fragmented. Our culture is now in the wholesale process of “integration downward into the void.” That is, as unbelief gets its cultural act together, its deadly consequences and ultimate despair become more integrated in society and obvious to even the simplest citizen. Long predicted, infanticide has now become a topic of discussion and even legalization. I am convinced that this horrific practice may be the “bridge too far” that ultimately explodes in secularism’s face. I suspect that this may begin retarding the downward collapse of our culture. Of course, this will require a revival of Christianity in America, which postmillennialism expects. This article shows the horror of unbelief in our culture.

A Virginia bill that would have flung wide open the door to late-term abortions in that state caused a nationwide backlash and accusations that supporters of the measure were promoting infanticide. The bill died in a House of Delegates subcommittee vote last Monday, but the controversy about it has since inspired a push in the U.S. Senate to protect newborn babies from abortionists.

Virginia House Bill 2491, which failed by a 5-3 vote along party lines, would have gotten rid of protections for the unborn through all nine months of a pregnancy. Its provisions would have removed the requirement that facilities performing five or more first trimester abortions per month be classified as hospitals, done away with mandatory ultrasounds and a 24-hour waiting period, reduced the number of physicians required to approve a third trimester abortion from three to one, and allowed for second trimester abortions to take place in facilities other than hospitals. But the most contentious part of the bill was a proposed change to the requirement that the threat to a woman’s health—including her mental health—be “substantial and irremediable” for her to have a third trimester abortion.

Democratic Delegate Kathy Tran, the bill’s sponsor, admitted during testimony to a subcommittee of the House Courts of Justice Committee that the removal of the words “substantial and irremediable” would be “changing the standard” for having an abortion in Virginia. After a national uproar, Tran said she misspoke when she testified that her bill would allow a pregnant woman to request an abortion even if she was moments away from giving birth: “I should have said, clearly, ‘No, because infanticide is not allowed in Virginia, and what would have happened in that moment would be a live birth.’” The Fairfax County delegate said she received death threats after video of her testimony went viral. She temporarily shut down her social media pages and had police guard her and her four young children.

Fellow Democratic Delegate Dawn Adams, a nurse practitioner who co-sponsored the bill, later apologized to her constituents for supporting it. “I did not read a bill I agreed to co-patron and that wasn’t smart or typical,” she said. “I am sorry that I did not exercise due diligence before this explosion of attention; had I done so, I would not have co-patroned.”

Gov. Ralph Northam, also a Democrat, added fuel to the fire Wednesday by describing in a radio interview a hypothetical situation in which an infant who was severely deformed or unable to survive after birth could be left to die: “If a mother is in labor, I can tell you exactly what would happen. The infant would be delivered. The infant would be kept comfortable. The infant would be resuscitated if that’s what the mother and the family desired and then a discussion would ensue between the physicians and the mother.” Northam called the controversy overblown and said that as a physician he has devoted his life to caring for children. A scandal over racist yearbook photos has since engulfed the governor.

The Virginia proposal was one of several across the nation to attempt to remove virtually all protections for unborn babies. A law signed last month by New York Gov. Andrew Cuomo, a Democrat, enshrines abortion as a fundamental right in that state. In 2017, Delaware passed a law that allowed abortion through all nine months of pregnancy and removed every protection for unborn children from the state’s legal code. Similar efforts are underway in New Mexico, Nevada, Rhode Island and Vermont.

In an interview with Fox News, Sen. Ben Sasse, R-Neb., remarked on how much the pro-abortion narrative has changed since President Bill Clinton called for abortion to be safe and legal but rare.

“And now you’ve got Northam on the radio this week literally saying, if the baby survives an abortion, somebody could keep her warm for a little bit, and then doctors could have a debate about infanticide as this little girl is cold and alone on a table,” Sasse said. “It’s nuts.” Sasse is sponsoring a bill called the Born Alive Abortion Survivors Protection Act that would safeguard infants who survive botched abortions. He plans to call for a unanimous consent vote Monday evening that would fast-track the measure’s approval.

“I’m going to ask all 100 senators to come to the floor and be against infanticide,” Sasse said Thursday on the Senate floor. “This shouldn’t be complicated.”

Wyoming: The state House of Representatives approved a bill Friday that would require women to wait 48 hours after receiving approval for an abortion to carry out the procedure. The bill, which passed 36-22, has an exception if the life of the mother is in danger. It is now headed to the state Senate for a vote.

Florida: Republican state Sen. Joe Gruters introduced a bill last Monday that would protect the unborn from abortion after 20 weeks of gestation. He called late-term abortion “an assault on basic human decency to other humans.”

Tennessee: Gov. Bill Lee, a Republican, said last week that he will support a bill that would protect the unborn after they have a detectable heartbeat, which can be as early as six weeks of gestation.

Louisiana: The U.S. Supreme Court announced Friday it would need more time to review evidence in a case about a Louisiana law that requires abortionists to have hospital admitting privileges. —S.G.

The producers of Unplanned, a film about former Planned Parenthood facility manager Abby Johnson’s conversion to the pro-life movement, released a trailer last week. Johnson, a mother of seven living in Texas, now runs And Then There Were None, a pro-life organization with the mission of helping abortion workers leave the industry. The movie is due out March 29.  . . .