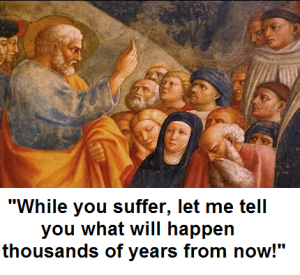 In my last article I noted the significance of John’s opening time-indicators for interpreting Revelation. These powerfully demonstrate the preterist (past tense) approach to Revelation. That is, that the vast majority of Revelation’s event lie in our distant past and in John’s approaching future.

In this article I will point out the significance of John’s original audience to interpreting his dramatic book. He emphasizes the nearness of his prophetic events, in a way most relevant to his original recipients. In fact, to delay the prophetic events thousands of years would contradict his whole point in writing Revelation.

First, John writes to seven historical churches. Immediately after twice declaring the nearness of the events (1:1, 3) we read: “John to the seven churches that are in Asia” (1:4a). In 1:11 and 2:1–3:22 he specifically names the churches. John informs these first century churches of events ‘soon’ (1:1) to come to pass because “the time is near” (1:3). How could they have understood John to really mean that either 2,000 years would elapse before the events broke out or that they would drag on and repeat themselves for 2000 years?

Second, studies by William Ramsey and Colin Hermer show how intimately Revelation addresses those specific churches regarding their histories, settings, and struggles. The seven letters are occasional letters designed specifically for their concerns.

Fourth, John wrote Revelation while these churches were enduring stressful times: “I, John, your brother and fellow partaker in the tribulation and kingdom and perseverance which are in Jesus” (1:9a). Revelation promises quickly to vindicate the martyrs who cry: “How long?” (6:9). The were told “they should rest for a little while longer” (6:10-11; cp. Lk 18:7-8). In fact, later in Revelation, we learn “there shall be delay no longer” (10:6). Yet, on the non-preterist interpretation, their vindication was not after “a little while,” and the events await an enormous delay.

One thought on “HELP FROM JOHN’S AUDIENCE”