THE MYTH OF APE-TO-HUMAN EVOLUTION 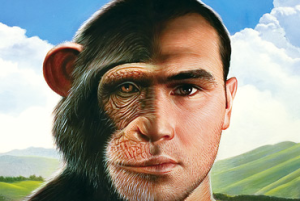 Gentry note:
This article from Creation Ministries, Intl., provides an excellent, brief rebuttal to the idea of human evolution. I republish this article because the postmillennial worldview not only deals with eschatology but has its foundation in protology, the study of origins. The end is rooted in the beginning. Christians need to be alert to the errors of evolution from nothing and commit to creation by God.

The public is frequently led to think that the evidence of humans evolving from an apelike common ancestor with chimps is simply overwhelming. The claim is often made in bombastic, even intimidating terms, such as in this example of `elephant hurling’ tactics by a prominent evolutionist:

“There are now tens of thousands of hominid fossils in museums around the world supporting our current knowledge of human evolution. The pattern that emerges from this vast body of hard evidence is consistent across thousands of investigations. All models, all myths involving singular, instantaneous creation of modern humans fail in the face of this evidence.”

However, when one starts to critically analyze these claims, things rapidly fall apart. For most categories of ‘hominid’ claimed, there are usually even evolutionist experts who themselves will point out something that seriously questions, if not disqualifies, the idea that the fossils concerned are ‘in-between’ apes and humans. For example:

Australopithecines (like ‘Lucy’): there are distinguished evolutionists who admit that these extinct primates were not anatomically intermediate between apes and humans.

Neandertals: probably most evolutionist paleoanthropologists now say that, although being robust in their anatomy, these are fully human.

Homo erectus and Homo heidelbergensis: some evolutionists classify them as ‘early’ and/or ‘archaic’ Homo sapiens. They had robust anatomy, as did the Neandertals, and like these there is no reason to believe that they were not fully human either.2

Homo habilis: whilst evolutionists generally regard these specimens as hominids (ape-men), when scrutinized this species appears to consist of specimens that should be grouped with the australopithecines, or other extinct apes, apart from a few that are likely Homo erectus.2 Even some prominent evolutionists, whilst still saying they were hominids, have suggested most of the specimens in Homo habilis should be re-assigned to the genus Australopithecus. Hence, Homo habilis is a false category. Terms such as `wastebasket’, `grab bag’ and `garbage bag’ have been used by evolutionists to describe it.

Remove all those from the hugely impressive-sounding number of fossils in the above quote, and we’re left with a mere handful. Among these are the more recently discovered Homo florensiensis (aka `The Hobbit’) specimens. Here, too, leading evolutionists have pointed out that their features would be consistent with humans deformed by cretinism, from congenital iodine deficiency. Moreover, this magazine has highlighted the evidence that cretinism is also a likely cause of the puzzling (to evolutionists) features of the even more recently discovered Homo naledi fossils.3

Is human evolution even possible?

In any case, however, there are substantial biological reasons why `ape-men’ could never even have existed. A major one of these reasons is the so-called `waiting time problem’. No-one disagrees that to cause all of the anatomical changes required to transform an ape-like creature (the supposed common ancestor of chimps and humans) into a human would take millions of DNA mutations. This is because there are millions of nucleotide (`DNA letter’) differences between chimps and humans. And in the evolutionary timeline, this is supposed to have happened in six to seven million years. The problem in a nutshell is that calculations show that it would take way too long for these specific mutations to arise and become established within a so-called `hominin’ population.4

For example, even for one point mutation (one letter change) to become fixed (established), the waiting time is a minimum of 1.5 million years.4 The number of nucleotides that can be selected for simultaneously is believed to be small, as it interferes with the selection of other nucleotides (called selection interference). It has been estimated that at most 1,000 beneficial mutations could become fixed in six million years-and using seven million, the upper end of the range, makes no practical difference.5

But this is only a minuscule fraction of the information needed to turn an ape into a human.

Note that this is only for independent, unlinked mutations, as according to John Sanford, an expert in this area (emphasis in original): “Selection for 1,000 specific and adjacent mutations (to create a 1,000-letter string) could not happen in 6 million years because that specific sequence of adjacent mutations would never arise, not even after trillions of years.” 6

Even if the genome (DNA) difference between chimps and humans were as little as 1%, as used to be widely touted, this still represents around 30 million nucleotide differences. And hence in the evolving hominid line, around 15 million nucleotide changes would need to take place compared to the 1,000 changes at most that could have happened in that time.

In short, even with the false idea of just 1% difference, the transition is impossible for mutations to achieve in the time available. But the problem for evolution is compounded because the chimp-human difference is now known to be not 1%, but likely at least 5% different and probably more.7

So the hurdle for evolution is even more insurmountable. A five-fold increase in the difference now means some 75 million nucleotide changes since the imagined common ancestor. . . .

Peter Line. Peter’s undergraduate majors were in biophysics and instrumental science. After this, he completed Master’s and Ph.D. degrees in the area of neuroscience, focusing on brain electrophysiology, and spent over a decade involved in such research. Subsequently, he worked as a university lecturer, teaching in the area of anatomy and physiology for over a decade. Peter has been interested in the creation/evolution issue ever since becoming a Christian, as evolution was a stumbling block to him believing God’s Word was true. He has had a particularly interest in the so-called hominid fossils for many years, and has published several articles on the subject.