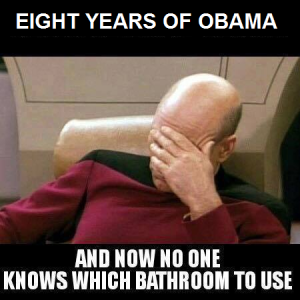 Gentry note:
With accelerating collapse of American culture and morality, we are witnessing the denial of some of the most basic realities, such as our gender. I have written on this topic myself. But I found this article insightful. If the postmillennial hope is to turn around our culture from its current nose-dive into the void, we must understand the issues. This is a good article for Postmillennial Worldview — even though I have no idea if Bill Smith is a postmillennialist!

Now for the article!

“Transgender” people have been around for quite some time. Up until recently, we haven’t really had to take them seriously as a culture. They were always on the fringe. In many ways they still are. However, now our culture is not only tolerating them, but they are being praised for their courage of breaking free from “social constructs” of male and female foisted upon them by the interpretation of their anatomy and becoming the sex (or gender) they really feel they are on the inside. The media that feed our society are pushing the rest of us to sympathize and celebrate these new heroes. Gender identity has become so fluid that the binary distinctions of male and female aren’t enough. Facebook has dozens of options and a “Custom” button for the user to choose an identity.

The question that confronts the church is one that many of us haven’t had to ask in the West for quite some time. With our Christian heritage, we have accepted the categories of male and female for centuries. But now we must give an account for why believe these are still valid categories. Some dismiss this out-of-hand as silly, requiring no argument. But as we take the gospel to our culture, this is a question we may have to answer. Does the gospel speak to this issue? Does it really matter if someone believes he’s a female even though he has a male anatomy (or vice versa)? Does this have any bearing on whether or not someone is a Christian?

The homosexual movement is one of the leading challenges to the moral stability of American culture and to our Christian influence in culture. In this sermon series Dr. Gentry tackles the homosexual question head on.

Some will say that it doesn’t. Some Christian churches are throwing their arms open wide to these folks without questioning these fundamentals of our existence. These things don’t ultimately matter, they conclude. Behind these conclusions lie reasonings that males and females are not distinct. “Male” and “female” are only external, peripheral realities. We are bags of sexual skin with an androgynous humanity filling them up. We are not male and female through-and-through. Consequently, when you change the peripherals, you aren’t really denying anything about your humanity. The peripherals are inconsequential.

But are they? Does male and female only go skin deep? No, it does not. This is something that should be obvious from biological evidence alone. We are different all the way to the cellular level. Muscle structure, bone structure, fat storage, as well as reproductive organs are all different. We think differently. According to some research, we even dream differently! When God created us a male and female in his own image, he created us as infinitely distinct, yet harmonious, individuals. The outward appearance of our bodies that are the public declaration to us and to the world that we are male or female, proclaim what is true throughout our embodied existence. We are not superficially male or female. We are not merely functionally male or female. We are male and female.

This is not an inherent weakness of creation that must eventually be overcome by androgynous salvation. Christ himself shows us that when we follow him in the resurrection of our bodies, we will do so as transformed males and females. We will retain our maleness and femaleness throughout eternity.

Our being male and female is part of the very good creation of God and is a gift to us. Just as with every gift of God, we have a responsibility; and this is where the gospel speaks to our culture in this area. The first responsibility we have before God is to acknowledge how he created us and give thanks for it. The refusal to give thanks is the first step down the spiral of depravity that leads to all of this sexual perversion (Rom 1.18-32). God created us male and female. He imposed upon us our identity. A fundamental step of faith is to acknowledge his creation of us, not merely as generic humans, but as males and females. The gospel calls for submission to Jesus’ lordship over our lives. If a man or woman cannot submit in this most basic area of life and begin to operate within the parameters of male and female, is he or she submitting to the lordship of Christ? . . .

Bill Smith has been married to Susan for right at twenty-eight years, has six children, a daughter-in-law, and is the proud grandpa of one granddaughter and one grandson. He is now the pastor of Cornerstone Reformed Church in Carbondale, IL.

One thought on “MALE AND FEMALE?”