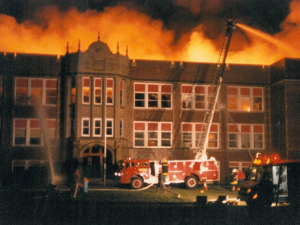 The world has changed quite a bit since I entered Dundee Elementary in 1965–66. No-fault divorce did not yet exist. Two-parent families were the norm. Abortion had not yet been legalized. The late-modern drug culture had not yet exploded. WWII had been over for more than 20 years and the baby boom had just ended. The suburbs were burgeoning. Top 40 radio was in its heyday and Roger W. Morgan was playing the hits on the Mighty 1290 KOIL. The hippie movement was still a sub-culture. The Vietnam War was intensifying but mostly we got just a moment or two of it on the CBS Evening News with Walter Cronkite. The civil rights movement was on the news as Dr King and others led peaceful demonstrations calling Americans to honor the promises enshrined in the constitution. Too often, however, those marches were met by fire hoses and police dogs. The Watts Riots, which were a reaction to decades of unjust treatment of minorities by the LAPD, convulsed Los Angeles in 1965 leaving scars that would last for decades. In those years, however, my school and neighborhood were all white.

So, naturally, I did not see any oppression even if it was not far from my quiet (still remarkably well-preserved) neighborhood near the old money neighborhood in Omaha. Economically, things were stable. The median family income in the USA was about $6,900 (= approx. $53,000 in 2017) and most families lived on a single income. Credit cards were just coming into use. The inflation rate was higher then (about 4%). Perhaps everyone was miserable and repressed but it did not seem so but then what did I know? I turned five years old in 1966.

The emphasis in school was, until the mid-70s, on the objective. This is what parents meant in the 80s when they complained that they wanted teachers to focus on “reading, writing, and arithmetic.” They could sense that something was shifting but most Americans did not know the history of public schools and were not aware that prospective teachers were being taught in “teachers college” and in universities that education was not “rote memorization,” that it was about “enrichment” and “experience” more grammar, logic, and rhetoric. During my entire primary and secondary education whenever anyone mentioned memorization it was inevitably accompanied with the adjective “rote” and we were given to think that was a bad thing. No teacher explained to me not only the utility of memorizing or the mechanics of it until my logic professor did so in passing, in 1981.

By the late 60s and early 70s the culture and economy were changing and so was education. In 1968 Dr King was assassinated and riots erupted in major cities across the USA. Bobby Kennedy was assassinated in Los Angeles. The Tet Offensive changed the American perception of the Vietnam War. Anti-war protests increased as more Baby Boomers were drafted. The hippie and drug cultures were more visible, even in middle America. Movies were becoming more sexually graphic and violent. Abortion on demand became legal in 1973. To date more than 60 million Americans have died under Roe v Wade (and Doe v Bolton). The Beatles were no more and disco ruled in the last days of top-40 radio. The effects of the 1964 Civil Rights Act were beginning to be felt but to speed up progress school districts began to try to integrate schools by busing children one part of town to another.

In economics, a long-running, large-scale war combined with spending on “Great Society” social programs and attempts to stimulate prosperity through taxing, borrowing, and spending led to “The Great Inflation” for about a decade. That meant that products cost more but salaries and wages could not keep up. Each dollar earned was worth less than it had been. The economy stagnated and what was then called “Women’s Lib” (second wave feminism) saw wives going work outside the home (as they had during WWII). That meant a growing number of “latch-key” kids (of which I was one) and less parental supervision of children.

Though the divorce rate had been climbing through the 20th century, fueled by a large-scale demographic shift from the country to the city (urbanization) and two world wars, 1 the advent of no-fault divorce resulted in a sharp jump in the divorce rate and the number of single-parent families.2 By the 70s the television showed us all in “glorious living color” what “the good life” could be. Families, like the government, increasingly began to pay for things on credit in a frantic attempt to obtain it. In the schools, the emphasis on the subjective was beginning to become more manifest. By the mid to late 1970s, teachers were openly challenging the authority of parents, and advocating to their students a more radical social and economic philosophy.

The video below, published recently on the web, illustrates what is taking place in some public school classrooms. . . .

Robert Scott Clark is an American Reformed pastor and seminary professor. He is the author of several books, including his most recent work, Recovering the Reformed Confession.