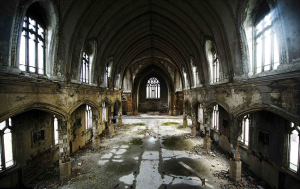 [Below is the first part of an excellent article titled “Christ Will Build His Church” that appeared in the April, 2016 Tabletalk devotional guide. I hope you will click the link and keep reading. – Ken Gentry]

Christ Will Build His Church

Europe is the new “dark continent.” Africa now sends more missionaries to Europe than Europe sends to Africa. The health reports of the European church aren’t terribly encouraging. Churches are closing and are being converted into mosques, museums, bars, and book depositories. In most European countries, less than 5 percent of the population attend any church. In France, there are more practicing Muslims than baptized Catholics. In England, more than 70 percent have no intention of stepping into a church—ever. In Berlin, the city where we live, 95 percent of church plants fail. END_OF_DOCUMENT_TOKEN_TO_BE_REPLACED

This is a republication of a recent American Vision newsletter notice. It speaks to the concerns of postmillennialists. It is written by Joel McDurmon. Here it is:

For some time, we at American Vision have considered expanding our ministry to a more international scope. Over time, we will certainly do this in a more official capacity, but sometimes God makes your plans for you. Sometimes He just places things in your path and makes you deal with them before you thought you were ready.

We already have readers and partners all over the world: many parts of Europe and the UK, several countries in Central and South America, Canada, Mexico, Indonesia, China, Japan, Australia, New Zealand, a few countries in Africa, and more. But this has always been informal. END_OF_DOCUMENT_TOKEN_TO_BE_REPLACED

William Carey is considered the “Father of Protestant missions.” His book, An Enquiry into the Obligations of Christians to Use Means for the Conversion of the Heathens, was written in 1792, the beginning of the so-called “Great Century” (1792-1914) between the French and the Russian Revolutions. For the centennial anniversary, none lesser than the mentor of German missiology, Gustav Warneck, wrote, “Thus, the year 1792 may be considered the true birthdate of modern missions.” Less that twenty days after the publication of the “Enquiry,” Carey held his sermon on Isaiah 54:2-3 and began to disseminate it with a clear appeal for missions to his fellow pastors, which soon led to the foundation of the mission society, “The Particular Baptist Mission”. The first mission society to do without state supervision, it was founded on different lines than the Anglo-Saxon honor societies.

Much has been written about Carey and his colleagues, their mission field in Serampore, and their achievements in printing, in Bible translation, in teaching and in many other areas. END_OF_DOCUMENT_TOKEN_TO_BE_REPLACED

Note: This is our fifth installment on the subject of finding a biblical church. We will pick up where we left off in our preceding article. END_OF_DOCUMENT_TOKEN_TO_BE_REPLACED