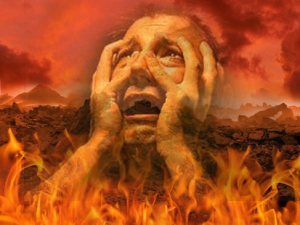 In this part of the series I have been considering moral objections to God’s absolute sovereignty. I have been showing that there are other doctrines that Christians hold that are equally objectionable on moral grounds, but which most Christians hold. In this installment I will focus on the doctrine of eternal hell.

Influential writers expressing revulsion at the doctrine of hell include the following:
John R. W. Stott has commented (as a conservative, evangelical Christian): “Emotionally, I find the concept intolerable.”

Clark H. Pinnock (who deems himself evangelical) writes: “Whatever the image, the traditional understanding of hell is unspeakably horrible. How can one imagine for a moment that the God who gave his Son to die for sinners because of his great love for them would install a torture chamber somewhere in the new creation in order to subject those who reject him to everlasting pain?”

Christian statement on hell
Nevertheless, Christians have largely agreed that the Bible teaches about hell. The following Confessional statement on hell represents the thinking of perhaps the majority of evangelical Christians. WCF 32:1: “The souls of the wicked are cast into hell, where they remain in torments and utter darkness, reserved to the judgment of the great day.”

Biblical declaration of hell
The Bible undeniably presents eternal hell as the ultimate judgment of the wicked. In fact, more is taught about hell by Christ himself than any other single individual in Scripture. Thus, our view of hell also impacts our view of Christ and his integrity and authority, as the atheist Bertrand Russell observed. Consider the forthright declarations of Scripture — several from our Lord Jesus himself.

So it will be at the end of the age; the angels shall come forth, and take out the wicked from among the righteous, and will cast them into the furnace of fire; there shall be weeping and gnashing of teeth. (Matt 13:49–50)

Then He will also say to those on His left, ‘Depart from Me, accursed ones, into the eternal fire which has been prepared for the devil and his angels. . . .’ And these will go away into eternal punishment, but the righteous into eternal life. (Matt 25:41, 46)

Just as Sodom and Gomorrah and the cities around them, since they in the same way as these indulged in gross immorality and went after strange flesh, are exhibited as an example, in undergoing the punishment of eternal fire. (Jude 7)

And another angel, a third one, followed them, saying with a loud voice, ‘If anyone worships the beast and his image, and receives a mark on his forehead or upon his hand, he also will drink of the wine of the wrath of God, which is mixed in full strength in the cup of His anger; and he will be tormented with fire and brimstone in the presence of the holy angels and in the presence of the Lamb. And the smoke of their torment goes up forever and ever; and they have no rest day and night, those who worship the beast and his image, and whoever receives the mark of his name.’ (Rev 14:9–11)

According to a recent Gallup Poll, 65% of the American population believes in hell, whereas 92% of those who attend church regularly believe in hell (hopefully not because their church service is so bad). The average evangelical Christian accepts the doctrine of hell, despite its intellectual and moral challenges. Yet many of the same Christians reject predestination on identical intellectual and moral grounds. This brings inconsistency into one’s reasoning. We must accept what the Scripture teaches no matter how difficult it may seem to our finite, fallen conceptions.