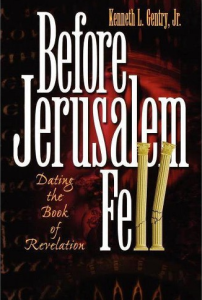 Although this topic is basically an academic one, its ultimate issue is extremely practical — hence the popular flavor of my presentation. Resolving the question of Revelation’s compositional date is one of the most — if not the most — important issues facing the interpreter. We may see its significance both regarding the interpretive and the practical questions revolving around the book.

First, interpretively, Revelation’s date exercises a tremendous influence upon its proper understanding. The current majority of biblical scholars is in fundamental disagreement with the majority of the scholars from 75 years ago and earlier. The current opinion — the late-date view — is that John wrote Revelation while in exile during the closing days of the reign of Domitian Caesar, in about A.D. 95 or 96. This contradicts the nineteenth century view — the early-date view — which held that Revelation was written by John prior to the destruction of Jerusalem and the Temple in A.D. 70. This position was held by such worthies as B. F. Westcott, F. J. A. Hort, John Lightfoot, Alfred Edersheim, Philip Schaff, Milton Terry, and others.

Early-date advocates generally understand Revelation’s prophecies to be dealing with the tremendous spiritual, social, political, and cultural upheaval leading up to and culminating in the destruction of Jerusalem in the ill-fated Jewish War of A.D. 67-70. This war effectively served as the birth-pangs delivering Christianity from its mother’s womb (Israel), thereby effecting an irremediable separation between these two great monotheistic religions. As Nicodemus asked: John 3:4 “How can one be born when he is old? He cannot enter a second time into his mother’s womb and be born, can he?” These first century issues also include the first Roman persecution of Christianity under Nero Caesar (A.D. 64-68), the catastrophic Roman Civil Wars (A.D. 68-69), and the extinction of the Julio-Claudian line of emperors with the demise of Nero (A.D. 68). Thus, Revelation would highlight the foundation of the kingdom in history.

Though yet a minority view today, within in the past twenty years a growing number of scholars is returning to a date earlier than A.D. 95-96. These diverse scholars include liberals C. C. Torrey, Rudolf Bultmann, and John A. T. Robinson; evangelicals C. F. D. Moule, F. F. Bruce, and R. B. Moberly; and reformed conservatives Cornelius Vanderwaal, Jay Adams, Greg Bahnsen, and R. C. Sproul.

The late-date view, on the other hand, allows for an almost infinite variety of interpretations. The three other basic schools of interpretation (other than preterism) prefer a late-date of composition: historicism, idealism, and futurism. Most of the supposed possibilities relate to events lying in the distant future, events betokening the end of world history. As such, Revelation would be speaking of the conclusion of the kingdom, or of the Church Age, if you will.

Thus, the date one assigns Revelation has the potential for placing the majority of its prophecies, particularly its judgment scenes, either at the beginning or at the end of Christian history. The issue of dating may literally turn Revelation on its head.

Does Revelation speak of a looming great tribulation, which soon will bring upon the scene of contemporary history irresistible worldwide chaos and upheaval? Or did it inform the first century Christians of grave and trying times they would face, which would demonstrate that Christianity could weather the most furious storms, thereby bracing them for the long haul?

Should we brace ourselves for the worst and, as Hal Lindsey urges us, “Live like people who don’t expect to be around much longer”? Or may we look to the future as lying before a conquering Church, which has already endured the Great Tribulation and now seeks victory in the world over the long haul?

Of course we must determine the particular date for Revelation on the historical and exegetical evidence, not upon our psycho-social predisposition. So let us now consider the evidence for Revelation’s dating. The view that I will be defending is that Revelation was written by the Apostle John in about A.D. 65 or 66, just after the outbreak of the Neronic persecution and just prior to the outbreak of both the Jewish War and the Roman Civil Wars. I will begin this study in my next article.

3 thoughts on “INTRODUCTION TO REVELATION’S DATE”