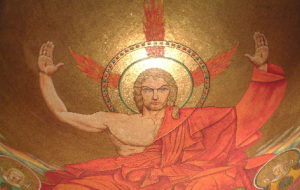 Daniel 7:13 is one of the most powerful eschatological statements in all of Scripture. And yet it is also one of the most misunderstood passages in popular Christian thought. A proper understanding of this verse — and it’s link to Daniel 7:14 — should go a long way in promoting a truly biblical eschatology. In this article I will provide a brief introduction to Daniel 7:13 — as it relates to Jesus’ eschatological teaching in Mark. I will focus especially on his prophetic statement in Mark 9:1.

Unfortunately, not only is Daniel 7:13 widely misunderstood by evangelical laymen, but Mark 9:1 is almost universally misunderstood by liberal biblical scholars. It is one of the passages used the most in attempting to undermine Jesus’ credibility (for instance, see Bertrand Russell’s, Why I am Not a Christian).

Mark 9:1 reads: “And Jesus was saying to them, “Truly I say to you, there are some of those who are standing here who will not taste death until they see the kingdom of God after it has come with power.” Unbelieving scholarship points to this as a prophetic error made by Jesus, which undermines any thought of his deity. They claim this because they believe that Christ is speaking of his Second Coming here.

Verse-by-verse analysis of Christ’s teaching on Jerusalem’s destruction in Matt 24. Show the great tribulation is past, having occurred in AD 70.

So, let’s get to work. Genesis 1 teaches that God created the heavens and the earth in six days. Therefore, as a divinely-created image of God, I will teach Daniel 7:13–14 regarding its reference to the clouds of heaven (v. 13) and the Son of Man’s rule over the earth (v. 14) in six points (though it will be spread out over more than one article — if I can’t keep awake long enough to finish it on the first try).

(A quick aside: If I could have reduced this to three points and thought of a good poem, this might have served as a good sermon for some daring pastor! But I dropped out of my first college poetry class, when the professor insisted to me that not every poem should begin with “Roses are read / Violets are blue.” This caused me to change my major from Poetic Sophistry to the closely-related major, Mechanical Engineering. But God had other plans for me: during my second week in the calculus class God called me into ministry. There I prepared seven sermons and hit the evangelistic trail. But enough about me!)

But let us tarry at the door of wisdom and insight no longer. Let us arise, go forth, and enter fully into the light of biblical eschatology:

I. The Meaning of Daniel 7:13 in Prophecy

“I kept looking in the night visions, And behold, with the clouds of heaven One like a Son of Man was coming, And He came up to the Ancient of Days And was presented before Him. And to Him was given dominion, Glory and a kingdom, That all the peoples, nations and men of every language Might serve Him. His dominion is an everlasting dominion Which will not pass away; And His kingdom is one Which will not be destroyed.” (Daniel 7:13–14)

The fundamental error made by most evangelical pastors and laymen is their failure to carefully read the passage before boldly preaching it. They almost invariably think that these verses in Daniel are referring to the Second Advent of the Son of Man (Christ) — despite what the text actually states. Daniel does not speak of the Son of Man’s coming to the earth. Rather, he very clearly speaks of his entering into heaven into the presence of God: “He came up to the Ancient of Days / And was presented before Him.”

Premillennialists especially like this passage in its misread form. This is because to them it seems to teach that when Jesus returns to earth, he will at that time establish his 365,000 day kingdom over “all the peoples, nations and men of every language” (Dan. 7:14).

But Daniel is presenting the messianic enthronement of the Son of Man in heaven — after he leaves the earth. Then because of his being gloriously enthroned, God will at that time grant him a kingdom in which he will exercise rule over all the nations (in a postmillennial fashion!). This is the fundamental point of the prophecy.

Now we are ready to develop the usage of Daniel 7 by Jesus. Unfortunately though, that will have to wait. As a former poet I am reserving the next few days for trying to find a word that rhymes with “orange” (excluding the word “orange,” because it is the same word and doesn’t count). I will also wisely employ my time researching the reason why there are no poems about cheese. So as you can see, I have my hands full.

But since you have borne with me thus far, in my next article I will continue studying the relationship of Daniel 7:13 and Mark 9:1. And to pique your interest, the points I will make in the following articles will be: