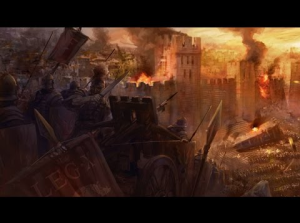 This is my third and final installment of a brief study on Rev 1:10. In this series I have been arguing that John’s “Lord’s day” is a reference to the eschatological “Day of the Lord” which crashes down on Jerusalem in AD 70. For context see the two preceding articles.

Third, John’s phrase is functionally equivalent to the more common one. Though Bauckham rejects this interpretation, according to Aune he “concludes that kuriakos is virtually synonymous with (tou) kuriou.” Thus, kuriakos can, in fact, be a synonym for the more common expression of the day of the Lord. Conceivably, John could simply be rephrasing the eschatological designate by using an adjective instead of noun in the genitive.

Thus, with Terry we must ask: “What remarkable difference is there between hemera kuriou and kuriake hemera?” The only other use of kuriakos in the NT refers to the “Lord’s supper” (kuriakon deipnon). This simply defines the sacramental supper as especially belonging to the Lord. This is exactly the significance of the judgmental “Lord’s day” in Rev for it signifies “the wrath of the Lamb” (6:16) and even “the great day of their wrath (6:17), i.e., God and the Lamb’s.

In the Logos edition, these volumes by Ken Gentry are enhanced by amazing functionality. Important terms link to dictionaries, encyclopedias, and a wealth of other resources in your digital library. Perform powerful searches to find exactly what you’re looking for. Take the discussion with you using tablet and mobile apps. With Logos Bible Software, the most efficient and comprehensive research tools are in one place, so you get the most out of your study.

A similar grammatical problem appears in Rev: this one regards the phrase “like to a son of man” in 1:13. Some commentators, such as Swete and Beasley-Murray, take the phrase “like to a son of man” in v 13 as not equivalent to Christ’s self-designation in the Gospels as “the Son of the Man.” This argument rests largely on the structural differences between the phrases: 1:13 leaves out the definite articles, which are found in the Gospels. (Surprisingly, Beasley-Murray contradicts himself by speaking of the same phrase in 14:14 as “the Son of man.”) Yet others, such as Charles and Hendriksen, identify the phrases. Charles even boldly states that the Apocalyptic statement here is “the exact equivalent” of that in the Gospels. Consequently, it would seem that identifying slightly different phrasing regarding the “Lord’s day” / “day of the Lord” would be tolerable here at 1:10, as well.

Fourth, in stating his Lord’s day experience he mentions the voice “as a trumpet (hōs salpiggos) (1:10b). Osborne observes regarding the trumpet that “in almost every NT occurrence it has eschatological significance as a harbinger of the day of the Lord” (e.g., Mt 24:31; 1Co 15:52; 1Th 4:16). We should note the OT backdrop in Isa 27:13; Joel 2:1–2 (cp. Jer 4:5, 9; Hos 5:8; Zep 1:14–16; Zec 9:12–14). This association arises from the paradigmatic theophany at Sinai (Ex 19:16, 19–20) which shows the power of God’s coming and presence on earth. In Ex 19 “the Advent of Yahweh’s Presence at Sinai is the formative event of OT faith” (WBC) which is an “indescribable experience of the coming of Yahweh” (WBC). Hence, there we read of “the sounding of a trumpet to signal Yahweh’s arrival” (WBC); it “was, as it were, the herald’s call, announcing to the people the appearance of the Lord” (Keil and Delitzsch). Thus, later “day of the Lord” references pick up this trumpet sound; and in 1:10 John associates the trumpet with his “Lord’s day.”

Commentary on Matthew 21–25 Notice
I am currently raising funds to engage research and writing on a commentary on Matthew 21–25, which contains the Olivet Discourse. This commentary will provide a Composition Critical approach to this textual unit in Matthew. In doing thus, it will show why Matthew presents Jesus’ Olivet Discourse as he does, in a way that differs in several respects from Mark and Luke. This commentary will demonstrate that the Olivet Discourse deals with both the AD 70 destruction of the temple and the Second Advent (which is anticipated by AD 70). This is important for presenting Christ as more than just a Jewish sage concerned for one nation.