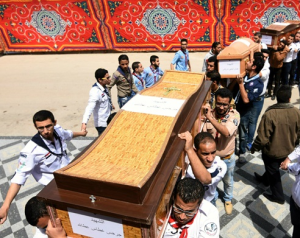 [Gentry note: Postmillennialists do not believe Christ’s kingdom comes by “swords’ loud clashing” (cp. John 18:36). The example of these Coptic Christians shows us a powerful tool in evangelism: a steady, Christian witness.]

Twelve seconds of silence is an awkward eternity on television. Amr Adeeb, perhaps the most prominent talk show host in Egypt, leaned forward as he searched for a response.

“The Copts of Egypt … are made of … steel!” he finally uttered.

Moments earlier, Adeeb was watching a colleague in a simple home in Alexandria speak with the widow of Naseem Faheem, the guard at St. Mark’s Cathedral in the seaside Mediterranean city.

On Palm Sunday, the guard had redirected a suicide bomber through the perimeter metal detector, where the terrorist detonated. Likely the first to die in the blast, Faheem saved the lives of dozens inside the church.

“I’m not angry at the one who did this,” said his wife, children by her side. “I’m telling him, ‘May God forgive you, and we also forgive you. Believe me, we forgive you.’

“‘You put my husband in a place I couldn’t have dreamed of.’”

“How great is this forgiveness you have!” his voice cracked. “If it were my father, I could never say this. But this is their faith and religious conviction.”

Millions marveled with him across the airwaves of Egypt.

So also did millions of Copts, recently rediscovering their ancient heritage, according to Ramez Atallah, president of the Bible Society of Egypt which subtitled and recirculated the satellite TV clip.

“In the history and culture of the Copts, there is much taught about martyrdom,” he told CT. “But until Libya, it was only in the textbooks—though deeply ingrained.”

The Islamic State in Libya kidnapped and beheaded 21 mostly Coptic Christians in February 2015. CT previously reported the message of forgiveness issued by their families and the witness it provided.

“Since then, there has been a paradigm shift,” said Atallah. “Our ancestors lived and believed this message, but we never had to.”

Copts date their liturgical calendar from 284 AD, the beginning of the Roman persecution under Diocletian. Troubles with pagan and Muslim rulers have ebbed and flowed over time, but in his Easter message Pope Tawadros lauded the Coptic Orthodox as a “church of the martyrs.”

This history returned with a vengeance in 2010, when the Two Saints Church in Alexandria was bombed on New Year’s Eve. Copts poured out into the streets in anger, presaging the Arab Spring. In the months that followed, Muslims rallied around them and defended their churches.

Nearly seven years later, the nation has grown weary. The Palm Sunday twin suicide bombings killed more than 45 people and are the second ISIS attack on Christian sanctuaries in five months. Twenty-nine people were killed in a suicide bombing at the papal cathedral in Cairo in December. This week, ISIS attacked the famous St. Catherine’s monastery on the southern Sinai peninsula.

This work is helpful for understanding and combating false religions and cults. It deals with the leading false religious beliefs in the world today. Chapter on apologetics by Ken Gentry.

All three Christian denominations canceled Easter Sunday festivities, and the Orthodox postponed the reception of condolences. The state declared a three-day period of mourning and held an Easter service for the injured in a military hospital. Muslims reacted in shock and sympathy.

But while signs flutter in public squares about national unity, the visible outpouring of solidarity appears far less.

The atmosphere has changed, said Amro Ali, a Muslim assistant professor of sociology at the American University in Cairo (AUC).

“Among everyone there is now a sense of melancholy,” he said. “The bombings are part of a larger trend where things are just crumbling.”

Following the bombings, the government reimposed a state of emergency (in effect almost every year since the 1980s), expanding police and military powers. Ali connected the mood to the crackdown on activists and the deteriorating economy, but said the Coptic state of depression was more acute.