CHRISTIANS MUST ENGAGE THE CULTURAL WAR 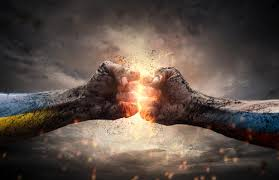 Whenever I hear Christian leaders talk about the inevitable collapse of the church of America (or elsewhere) I ask myself, “But hasn’t Jesus risen from the dead? Didn’t He ascend to the right hand of the Father? Hasn’t all authority in heaven and earth been given to Him? And aren’t we commanded to go and make disciples in His name and by His authority?”

If so, how then we can speak of any inevitable collapse of the church (or, specifically, of Christian society), regardless of how inevitable that collapse appears to human eyes?

I therefore differ strongly with conservative journalist Rod Dreher who has written, “The culture war that began with the Sexual Revolution in the 1960s has now ended in defeat for Christian conservatives. . Don’t be fooled: the upset presidential victory of Donald Trump has at best given us a bit more time to prepare for the inevitable” (my emphasis; from his new book The Benedict Option: A Strategy for Christians in a Post-Christian Nation).

The culture war has hardly “ended” and there is nothing “inevitable” about the collapse of Christian society in America, although, without question, the patient is mortally ill and in need of radical surgery and rehabilitation. But the heart is still beating, there are millions of committed believers throughout the land, prayers are ascending to heaven 24/7 for another great awakening, and it’s actually possible that America’s best days are still ahead, regardless of how bleak things look right now (and without a doubt, they look very, very bleak). Are not all things possible to him or her who believes?

What makes today’s spiritual pessimism all the more galling is that, in my view, the biggest reason for America’s current moral and spiritual decline is the backslidden, unengaged, carnal state of the much of the church. In other words, America is messed up because the church has been messed up, because we who profess faith in Jesus have all too often been superficial in our commitment, as a result of which the world has changed us rather than us changing the world.

When it comes to the mainline denominations, in many instances there has been a wholesale departure from the authority of Scripture and the lordship of Jesus, leading to the abandonment of our moral compass.

When it comes to evangelical Christians, we have often preached a narcissistic, “what’s in it for me” gospel, a self-centered message that bypasses the cross and calls for virtually no sacrifice or service, a message that empowers the sinner rather than transforms the sinner, leading to “Christian” rappers who talk about Jesus in the midst of profanity-laced rants (all while still getting high, going to strip clubs, and partying), and to “Christian” models and actresses who strip down in the most seductive poses, simply because it’s part of their job — and I assure you they can find big churches in America who will welcome them with open arms and celebrate their “liberty” in Jesus. (It’s one thing to welcome the worst of sinners into our midst with open arms and without condemnation; it’s another thing to celebrate carnality and compromise.)

Little wonder that the rest of the public is so confused. After all, the church is supposed to function as the conscience of the nation.

Fulfilling Our Mission in the World

When it comes to social issues like abortion and homosexuality, the vast majority of Christian conservatives in our country have no almost regular engagement with women having abortions and engage in very little compassionate outreach to those who identify as LGBT. As for those of us who do get involved in social issues, we tend to do it politically, looking to the government (especially the Republican Party) to fix things, as if passing a law alone would “fix” the desecration of life or reverse the breakdown of the family.

But being the church means heeding the words of Jesus, who calls us out of the world when it comes to participating in sin but into the world when it comes to fulfilling our mission, which is to shine like lights in dark places, to boldly proclaim the message of redemption, to reach out to hurting and suffering sinners, to make a difference in the communities in which we are planted, and to stand for truth and righteousness “without compromise, no matter what it costs.”

After all, we’re here as the Lord’s ambassadors, declaring the gospel to a dying world, and if we back down and retreat, who will reach this generation with the good news?

2 thoughts on “CHRISTIANS MUST ENGAGE THE CULTURAL WAR”