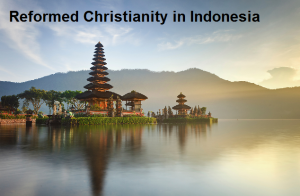 With more than 16,000 students, Universitas Pelita Harapan is one of the largest Reformed Christian universities in the world. Started just 22 years ago, the university offers a law school, medical school, engineering school, and teachers college—all from a distinctly Reformed worldview.

“We don’t even have that in the United States or Europe,” said Ric Cannada, chancellor emeritus for Reformed Theological Seminary. “Here it is in Indonesia. Isn’t it just like the Lord to do something like this in the least likely place—the country with the largest Muslim population in the world?”

Though Christians compose only 10 percent of Indonesia’s population, the nation is so populous that roughly 25 million Christians live there. About one-third are Catholic, while the Protestants are typically either Pentecostal or Reformed—as in, really Reformed.

“Over here in the States we talk about the Reformed world- and life-view, but they’re doing it,” Cannada said. “Doing it on steroids.”

Bankrolled by an enormously successful Indonesian businessman with a love for God and Reformed theology, the Pelita Harapan Foundation—where Cannada is a senior adviser—has opened 55 Christian K–12 schools in the last 25 years.

Pelita Harapan is the mission side of businessman James Riady’s domain. But of course he also has a business side—and it’s enormous: 30 hospitals, 64 malls, 125 department stores, and the country’s largestmedia group.

Both are informed by the Reformed tradition, said Niel Nielson, the former president of Covenant College who now leads the foundation’s education wing and sits on the board of directors for its hospitals and department stores.

“[The Riady family] is passionately Reformed in their theological perspective, and they link all that together in terms of how they understand the corporation,” he said. “There is energy and focus on integration unlike anything I’ve seen anywhere in the world.”

Nielson says the “thick-walled silos” between faith and education or vocation that often exist in the United States “do not exist there, in terms of the driving mission and vision.”

“We’re passionate about business—about economic sustainability—but also about a biblically informed vision of common grace that leads to saving grace for the country,” Nielson said.

Though “there’s no such thing as a Reformed balance sheet—you either show profits or you don’t,” the board “talks a lot about the creation mandate and the fact that we’re called to steward the gifts God has given us.”

“We tell them we believe they’ve been uniquely created in the image of God, and he has a purpose for every human being,” Nielson said.

Not Behind the Scenes

These Christian convictions don’t stay behind-the-scenes, even if they’re rarely center stage. For example, Riady’s 60 coffee shops don’t serve tracts with their beverages, but they do play Christian music, and employees go out of their way to treat people with dignity. All of his businesses aim to deliver high-quality products and to deal honestly with everyone.

Nielson said what’s going on in Indonesia is similar to what you’ll hear in the faith and work conversation in the United States. But he added that it seems easier to give the concept legs in Indonesia. That’s partially because of the high level of religiosity in the country. Most Indonesians (85 percent) identify as Muslim, and nearly everyone feels strongly about their faith, and expects to see that in others….