THE BIBLE’S MOST OFFENSIVE VERSE 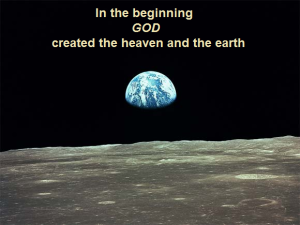 Here are twenty-six reasons why Genesis 1:1 is the most offensive, enraging verse in the Bible to the modern mind:

1. Genesis 1:1 starts with God. It presents the specific living God of Scripture as the sole sufficient starting place for reasoning, not as a conclusion reached at the end of a syllogism or evidence chain. We don’t get to stack the deck by massaging a preselected set of facts to adorn our predetermined conclusion. (It isn’t our deck to stack.)

2. Genesis 1:1 presents God alone as sovereign and self-sufficient. We like to reserve those adjectives for ourselves.

4. It explains why actual science can even be done. Many erstwhile scientists hate this fact, twisting themselves into pretzels in an effort to erect a contrary.

5. At the same time, it explains the limits inherent in all empirical experimentation, and gives all such endeavors an interpretive framework. If our “knowers” weren’t warped beyond our ability to repair, this would be welcome news. As they are hopelessly twisted (Jeremiah 17:9), it is not (Romans 1:18-23).

6. It packs a premise that leaves us with a binary choice. We don’t like to be cornered or to have our commitments exposed.

7. Its choice of opening word (Hebrew beres?t, in-beginning, rather than, say, on the first day) points both to a purpose and an end. We imagine that we can invent both for ourselves.

8. It shows us that matter matters, but is not absolute. Matter is created, only God is ultimate. We like to play the insane game of both asserting the ultimacy of matter, and gassing about intangibles such as meaning and right and wrong. It can’t work, it won’t work, and Genesis 1:1 points us to the truth of the.well.the matter.

9. It reveals matter as real, but not as real as God. The first part is unwelcome news to mystics of all stripes, as is the latter to all materialists, who are exposed as missing the greater while worshiping the lesser. These days, we want to pose as both.

10. It tells us that creation comes to us predefined. Our fantasy is that we are free to redefine, and that our redefinitions are equally valid with the Creator’s definitions.

11. Therefore, Genesis 1:1 exposes all attempts to ignore, reshape, violate, or rebel against created categories as suicidal fools’ errands. We prefer to see them as heroic, noble, and life-affirming.

12. It challenges our de facto assumption of our own deity. This leaves our religion in shambles.

13. It makes the universe not to be all about us. This is ruinous to our self-image.

15. It means that, if I ever disagree with God, I am not only wrong, but foolishly wrong; and the longer I argue the contrary, the greater fool I am. This is, to us, unthinkable.

16. It dooms every attempted moral argument that starts with with “It’s my body” to ultimate failure. But we like those arguments!

Nourishment from the Word
(by Ken Gentry)

17. It similarly destines any attempt to ghettoize Biblical faith to defeat. “The heavens and the earth” is a merism, a figure of speech where naming two poles includes everything between them. But we want to see God-talk kept out of the public square, and believers banned from public life.

18. It assures me that God alone is ultimate, and that He doesn’t need me; whereas I am dependent, and utterly do need Him – on every level, and regardless of how I feel about it or what I prefer to think.

19. It collapses all my feelings into irrelevance in the face of God’s fact.

20. It affirms God’s priority over every individual created thing, and over all created things, combined. That would include me, and all my favorite SJW causes.