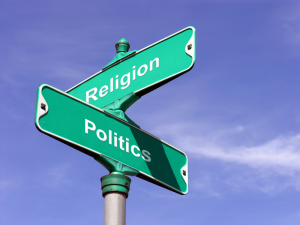 How do we keep our heads up in a shifting political climate? We must rely on a stout, optimistic, and biblical worldview. Pessimistic eschatology works against us as we seek to glorify God in our toil. But biblical optimism is jet fuel in our tanks. Postmillennialism is high octane orthodoxy and it’s about to squeal your tires.

Postmillennialism teaches that the one thousand years of peace described in Revelation 20 will be enjoyed before Jesus returns to judge the quick and the dead. This view is called “postmillennialism” because Christ returns after (post) his millennial reign. The Gospel will prosper, the masses will be converted, and nations and their rulers will submit to King Jesus. This belief is far removed from the prevailing notion that the world is going to Hell in a hand basket.

The persecuted church will be vindicated in the resurrection, and martyrs’ blood will be the engine that drives the Great Commission closer to completion. We mourn their loss, but we know, for them and the nations, it is gain.

The rest of this essay will develop three assertions:

1.) Christ will have dominion over the nations through his Church (the new Jerusalem) before his return.
2.) This dominion has political and cultural consequences.
3.) Baptism is the badge of citizenship in the Kingdom of God.

“It shall come to pass in the latter days that the mountain of the house of the Lord shallbe established as the highest of the mountains, and shall be lifted up above the hills; and all the nations shall flow to it, and many peoples shall come, and say: ‘Come, let us go up to the mountain of the Lord, to the house of the God of Jacob, that he may teach us his ways and that we may walk in his paths.’ For out of Zion shall go the law, and the word of the Lordfrom Jerusalem. He shall judge between the nations, and shall decide disputes for many peoples; and they shall beat their swords into plowshares, and their spears into pruning hooks; nation shall not lift up sword against nation, neither shall they learn war anymore.” (Isaiah 2:2-4)

You may perhaps be tempted to dismiss any attempt to locate the period which Isaiah describes in history; however, I believe Isaiah is as specific as if he had told us that this would happen at 3 o’clock, Thursday, November 22, 2014. Notice that he starts his prophecy by placing this period in the latter days. Peter used a phrase very similar to this one in describing the fulfillment of Joel’s prophecy in his Pentecost sermon. As the Spirit falls on the Apostles at Pentecost Peter finds himself answering charges of sipping on breakfast wine. He explains that what the people are witnessing is the fulfillment of Joel’s prophecy concerning “the last days”. So, the last (or latter) days began at Jesus’ resurrection. Just as history is divided into the period before Christ’s birth (BC) and the period during which he reigns from Heaven (AD), so the Bible divides history into the times before and after the resurrection of Christ. John, who lived during Jesus’ lifetime, is said by him to be the greatest Old Testament prophet. Though we read of him in the New Testament, he lives under the Old Covenant dispensation of history. It isn’t until after Christ’s resurrection that the New Covenant era begins. Among other things, this is evident by the transition from a seventh day Sabbath under the period of the Law to the Lord’s Day Sabbath under the New Covenant administration. So, when will the blessings described by Isaiah come to fruition? As he plainly states, these things will take place in the latter days.

There is also other evidence that this prophecy is fulfilled by the arrival of the New Covenant upon Jesus’ resurrection. Notice what Isaiah says concerning Jerusalem:

“the mountain of the house of the Lord shall be established as the highest of the mountains, and shall be lifted up above the hills; and all the nations shall flow to it,….. For out of Zion shall go the law, and the word of the Lord from Jerusalem.”

Jerusalem is to play a central role in the government of the nations in the period of history Isaiah describes. How are we to interpret this statement? First, let it be said that God’s revelation is progressive. We know more than David, David knew more than Moses, Moses knew more than Abraham, Abraham knew more than Noah, and Noah knew more than Adam. God reveals himself to humanity progressively in his mighty acts of redemption, and in his commentary upon those acts in Holy Scripture. In light of this, we must be careful to let the New Testament interpret the Old Testament. We must make certain that we are interpreting the Hebrew Scriptures the same way as the Apostles. So, what does the New Testament teach concerning the mountain of the Lord and Jerusalem?

“But you have come to Mount Zion and to the city of the living God, the heavenly Jerusalem, and to innumerable angels in festal gathering, and to the assembly of the firstborn who are enrolled in heaven, and to God, the judge of all….” (Hebrews 12:22-23)

In the context of this passage, the author of the book of Hebrews contrasts Mount Sinai, which made the people “tremble with fear”, and Mount Zion, Jerusalem, the city of the living God. In this passage the New Covenant assembly of God is described. This assembly of the firstborn has another name, the Church. Christ “is the image of the invisible God, the firstborn of all creation…. And he is the head of the body, the church.” The firstborn from the dead was raised that he may be the firstfruits of a great harvest. Christ, the firstborn, has made his Church a kingdom of Priests (Revelation 1:6). The priesthood replaced the firstborn who were consecrated as holy in Israel; therefore, Christ, the firstborn, reigns as the monarch of a kingdom of firstborns. This is the city of the living God, this is the Church. Simply put, Isaiah looks to the day when the Church of God is a beacon for the nations, and the result will be peace and prosperity when the law goes out from her.

The passage in Isaiah two has two sister passages that describe the same period in greater detail.

“There shall come forth a shoot from the stump of Jesse, and a branch from his roots shall bear fruit…. He shall not judge by what his eyes see, or decide disputes by what his ears hear, but with righteousness he shall judge the poor, and decide withequity for the meek of the earth; and he shall strike the earth with the rod of his mouth,and with the breath of his lips he shall kill the wicked…. The wolf shall dwell with the lamb, and the leopard shall lie down with the young goat, and the calf and the lion and the fattened calf together; and a little child shall lead them. The cow and the bear shall graze; their young shall lie down together; and the lion shall eat straw like the ox. The nursing child shall play over the hole of the cobra, and the weaned child shall put his hand on the adder’s den. They shall not hurt or destroy in all my holy mountain; for the earth shall be full of the knowledge of the Lord as the waters cover the sea. In that day ?the root of Jesse, who shall stand as a signal for the peoples—of him shall the nations inquire, and his resting place shall be glorious.” (Isaiah 11:1-10)

The righteous branch from the root of Jesse has come, and his name is Christ Jesus.

“For I tell you that Christ became a servant to the circumcised to show God’s truthfulness, in order to confirm the promises given to the patriarchs, and in order that the Gentiles might glorify God for his mercy…. Isaiah says, ‘The root of Jesse will come, even he who arises to rule the Gentiles; in him will the Gentiles hope.’” (Romans 15:8-12)

Paul plainly states that the prophecy in Isaiah 11 is being fulfilled in his ministry in history. Notice the similarities between Isaiah 2 and 11. In both of the passages God is judging the nations. In Isaiah 2 it is clear that God is the judge of the nations, but this authority to judge is given to the righteous heir of David in chapter 11. So, in addition to the Lord being an international judge, there is also the mention of Jerusalem. We saw the New Testament’s teaching concerning the Holy Mountain of God and the Heavenly Jerusalem in Hebrews 12; here we see that this mountain is vast.

The earth shall be full of the knowledge of the Lord as the waters cover the sea. This same mountain is described by Daniel in his prophecy (Daniel 2:34-35, 44-45). The Mountain of the Lord, which we saw in Hebrews 12 is the Church of Christ, will fill the whole earth. This is confirmed by Jesus in Matthew 13 where he describes the Kingdom of God as a mustard seed that, while being the smallest of all seeds, grows larger than all the plants and becomes a tree, so that the birds of the air come and make nests in its branches (31-32). Or again, as leaven that a woman took and hid in three measures of flour, till it was all leavened (33). The Kingdom of God is a never ending Kingdom. This is what we celebrate each Christmas when we read the words: “For to us a child is born, to us a son is given; and the government shall be upon his shoulder… Of the increase of his government and of peace there will be no end…” (Isaiah 9:6-7). As these texts emphasize, the reign of Christ will move outward until the earth is as full of the knowledge of God as the waters cover the sea.

Jonathan Cavett is a writer and instructional designer at an alternative finance company. He is co-founder of TheCovenantHerald.com and their newsletter, The Covenant Quarterly.