“EVERY MOUNTAIN WAS MOVED” 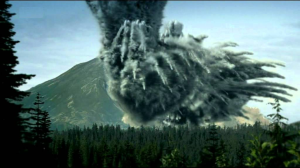 In Rev 6 one of the more dramatic images involves the shaking of all the mountains as God’s wrath falls. This is sometimes used as evidence against preterism and a first-century fulfillment of Rev. But does it undermine preterism? I think not. And here is why.

“And the sky was split apart like a scroll when it is rolled up; and every mountain and island were moved out of their places. And the kings of the earth and the great men and the commanders and the rich and the strong and every slave and free man, hid themselves in the caves and among the rocks of the mountains” (Rev. 6:14–15).

How shall we explain the moving of every mountain? What is the historical reality behind this apocalyptic imagery?

by Milton S. Terry
This book is Terry’s preterist commentary on the Book of Revelation. It was originally the last half of his much larger work, Biblical Apocalyptics. It is deeply-exegetical, tightly-argued, and clearly-presented.

To understand the imagery we must consider the first century circumstances involved in the Roman assault upon Israel. Much of Israel’s terrain around her important cities provided significant natural defenses serving as impediments to marauding armies. This is especially true for the armed forces of the highly ordered and mechanized Roman armies. Josephus frequently mentions the mountain impediments facing the Romans:

“Agrippa observed that even the affairs of the Romans were likely to be in danger, while such an immense multitude of their enemies had seized upon the mountains round about” (War 2:19:3).

“Now Jotapata is almost all of it built on a precipice, having on all the other sides of it every way valleys immensely deep and steep, insomuch that those who would look down would have their sight fail them before it reaches to the bottom. It is only to be come at on the north side, where the utmost part of the city is built on the mountain, as it ends obliquely at a plain. This mountain Josephus had encompassed with a wall when he fortified the city, that its top might not be capable of being seized upon by the enemies. The city is covered all round with other mountains, and can no way be seen till a man comes just upon it. And this was the strong situation of Jotapata.

Therefore, in order to try how he might overcome the natural strength of the place, as well as the bold defense of the Jews, made a resolution to prosecute the siege with vigor. To that end he called the commanders that were under him to a council of war, and consulted with them which way the assault might be managed to the best advantage” (War 3:7:7–8).

“A great multitude prevented their approach, and came out of Jericho, and fled to those mountainous parts that lay over against Jerusalem, while that part which was left behind was in a great measure destroyed; they also found the city desolate. It is situated in a plain; but a naked and barren mountain, of a very great length, hangs over it, which extends itself to the land about Scythopolis northward, but as far as the country of Sodom, and the utmost limits of the lake Asphaltiris, southward. This mountain is all of it very uneven and uninhabited, by reason of its barrenness” (War 4:8:2).

A remarkable feature of Roman siege warfare lies behind the image of the mountains being moved. The Roman legions included demolition crews who labored to overcome the mountainous defenses facing them. The moving of every mountain out of their places symbolizes their successful work, as recorded by Josephus.

“Now Vespasian was very desirous of demolishing Jotapata, for he had gotten intelligence that the greatest part of the enemy had retired thither, and that it was, on other accounts, a place of great security to them. Accordingly, he sent both foot-men and horsemen to level the road, which was mountainous and rocky, not without difficulty to be traveled over by footmen, but absolutely impracticable for horsemen. Now these workmen accomplished what they were about in four days’ time, and opened a broad way for the army” (War 3:7:3).

“But Titus, intending to pitch his camp nearer to the city than Scopus, placed as many of his choice horsemen and footmen as he thought sufficient opposite to the Jews, to prevent their sallying out upon them, while he gave orders for the whole army to level the distance, as far as the wall of the city. So they threw down all the hedges and walls which the inhabitants had made about their gardens and groves of trees, and cut down all the fruit trees that lay between them and the wall of the city, and filled up all the hollow places and the chasms, and demolished the rocky precipices with iron instruments; and thereby made all the place level from Scopus to Herod’s monuments, which adjoined to the pool called the Serpent’s Pool” (War 5:3:2).

These dramatic historical occurrences in Josephus fit well with the dramatic, symbolic prophecies of John. And given the near-term expectation established by John and the absurdity of a direct literal interpretation, nothing hinders the reasonable interpreter from recognizing these events as the historical fulfillments in view.

2 thoughts on ““EVERY MOUNTAIN WAS MOVED””