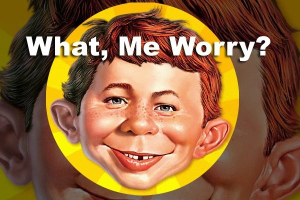 Evangelical laymen love to hear about the book of Revelation. Unfortunately, they tend to approach it as if it were a child’s toy. Many of contemporary dispensationalism’s best-sellers focus on Revelation. In a childish, shallow way.

We must recognize that even the trained, diligent scholar must approach Revelation with extreme caution, humbly recognizing that he is opening a book that has perplexed the finest minds and confounded the most godly saints throughout Christian history.

Gaius of Rome (d. 296) laments that “having formed an idea of it as a composition exceeding my capacity of understanding, I regard it as containing a kind of hidden and wonderful intelligence on the several subjects which come under it. For though I cannot comprehend it, I still suspect that there is some deeper sense underlying the words. And I do not measure and judge its expressions by the standard of my own reason, but, making more allowance for faith, I have simply regarded them as too lofty for my comprehension; and I do not forthwith reject what I do not understand, but I am only the more filled with wonder at it, in that I have not been able to discern its import” (Dion., Works 1:1:3).

Eusebius (AD ca. 260–340), the father of church history, notes that many declare it “unintelligible and illogical, and its title false” for it is not “an apocalypse (unveiling), since it is veiled by its heavy, thick curtain of unintelligibility” (Eccl. Hist. 7:25:1, 2). Cyril of Jerusalem (AD 315–86) forbade its public or private reading (Fiorenza 1991: 6). The great Latin church father Jerome (AD 340–420) laments in Epistle 53:8 that it contains “as many mysteries as it does words.” Methodius (d. AD 311) in his Symposium 8:9 mentions “the greatness of the mysteries of the text.”

Martin Luther (1483–1546), the famed Reformer and untiring interpreter of Scripture, originally rejects Rev as non-canonical, complaining, “My Spirit cannot adapt itself to the book.” In his German translation of the Bible, he complains in the preface to Rev that the book is “neither apostolic nor prophetic.” Fellow Reformer Ulrich Zwingli (1484–1531) refuses to take a doctrinal proof-text from Rev. In his Bern disputation he states: “I do not accept the witness of Revelation because it is not a biblical book.” Even John Calvin (1509–64) omits Rev from his prodigious commentary on the Bible — although he omits other books as well (2 John and 3 John).

John Wesley (1703–91) writes: “It is scarce possible for any that either love or fear God not to feel their hearts extremely affected in seriously reading either the beginning or the latter part of the Revelation. These, it is evident, we cannot consider too much; but the intermediate parts I did not study at all for many years; as utterly despairing of understanding them, after the fruitless attempts of so many wise and good men: and perhaps I should have lived and died in this sentiment, had I not seen the works of the great Bengelius. But these revived my hopes of understanding even the prophecies of this book; at least many of them in some good degree: for perhaps some will not be opened but in eternity.”

Adam Clarke (1762–1832): “I do not understand the book; and I am satisfied that no one who has written on the subject knows anything more of it than myself.”

The Book of Revelation Made Easy
(by Ken Gentry)

Because of these difficulties, deistic radical Thomas Paine cleverly noted that Rev is “a book of riddles that requires a Revelation to explain it.” Ambrose Bierce bitingly defined “Revelation” in his Devil’s Dictionary: “A famous book in which St. John the Divine concealed all that he knew. The revealing is done by the commentators, who know nothing.” Chesterton captures the sentiment of many in this regard: “Though St. John the Evangelist saw many strange monsters in his vision, he saw no creature so wild as one of his own commentators.” South concurs: “The book called the Revelation, the more it is studied, the less it is understood, as generally either finding a man cracked, or making him so.”

Christians: Be careful with Revelation. It has confounded the minds of the greatest scholars. Sadly today the least scholars are monkeying around with it like it was a ripe banana.