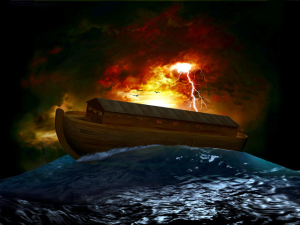 In the twentieth century, the German biblical scholar Rudolf Bultmann gave a massive critique of the Scriptures, arguing that the Bible is filled with mythological references that must be removed if it is to have any significant application to our day. Bultmann’s major concern was with the New Testament narratives, particularly those that included records of miracles, which he deemed impossible. Other scholars, however, have claimed that there are mythological elements in the Old Testament as well. Exhibit A for this argument is usually a narrative that some believe parallels the ancient Greek and Roman myths about gods and goddesses occasionally mating with human beings.

“When man began to multiply on the face of the land and daughters were born to them, the sons of God saw that the daughters of man were attractive. And they took as their wives any they chose… . The Nephilim were on the earth in those days, and also afterward, when the sons of God came in to the daughters of man and they bore children to them. These were the mighty men who were of old, the men of renown” (vv. 1–4).

This narrative is basically a preface to the account of the flood God sent to eradicate all people from the earth, except for the family of Noah. Of course, the flood narrative itself is often regarded as mythological, but this preparatory section, where we read of the intermarriage of “the sons of God” and “the daughters of man,” is seen as blatant myth.

The assumption in this interpretation of Genesis 6 is that “the sons of God” refers to angelic beings. Why do some biblical interpreters make this assumption? The simple answer is that the Scriptures sometimes refer to angels as sons of God, and it is assumed that the reference in Genesis 6 means the same. This is certainly a possible inference that could be drawn, but is it a necessary inference? I would answer no; I do not believe this text necessarily teaches the idea of sexual relations between angels and human beings.

To understand this difficult passage, we have to look at the broader application of the phrase “sons of God.” Pre-eminently, it is used for Jesus Himself; He is the Son of God. As noted, it is sometimes used to refer to angels (Job 1:6; 21:1; Ps. 29:1). Also, it is sometimes used to speak of followers of Christ (Matt. 5:9; Rom. 8:14; Gal. 3:26). So, the concept of divine sonship in the Scriptures is not always linked to a biological or ontological relationship (relationship of being). Rather, it is chiefly used to set forth a relationship of obedience. This means Genesis 6 could simply be speaking about the intermarriage of those who manifested a pattern of obedience to God in their lives and those who were pagans in their orientation. In other words, this text likely describes marriages between believers and unbelievers.

The immediate context of Genesis 6 supports this conclusion. Following the narrative of the fall in Genesis 3, the Bible traces the lines of two families, the descendants of Cain and of Seth. Cain’s line is recounted in Genesis 4, and this line displays proliferating wickedness, capped by Lamech, who was the first polygamist (v. 19) and who rejoiced in murderous, vengeful use of the sword (vv. 23–24). By contrast, the line of Seth, which is traced in Genesis 5, displays righteousness. This line includes Enoch, who “walked with God, and … was not, for God took him” (v. 24). In the line of Seth was born Noah, who was “a righteous man, blameless in his generation” (6:9). Thus, we see two lines, one obeying God and the other willfully disobeying Him.

Getting the Message
(by Daniel Doriani)
For all those who fear that the Bible is a mysterious labyrinth through which they cannot find their way, Doriani provides wonderful guidance. Written with craft and wit, this highly readable book combines great biblical insight with marvelous practical wisom.

Therefore, many Hebrew scholars believe that Genesis 6 is describing not the intermarriage of angels and human women but the intermarriage of the descendants of Cain and Seth. The two lines, one godly and one wicked, come together, and suddenly everyone is caught up in the pursuit of evil, such that “every intention of the thoughts of [man’s] heart was only evil continually” (v. 5). We do not need to surmise an invasion of the earth by angels in order to make sense of this chapter. . . .