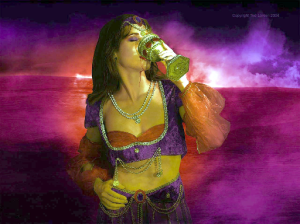 This is my second installment on the identity of the seven-sealed Scroll in Revelation. This symbol is crucial to understanding Revelation’s point. I will begin where I left off last time (sounds logical, doesn’t it?).

(10) In Revelation 10 we see the scroll fully opened and in a strong angel’s hand (Rev 10:2). This is Christ appearing as the “Angel of the Covenant” who is expected in Malachi 3:1 for the purpose of bringing judgment upon Israel. He appears here in angelic form, because he is a “messenger” [aggelos] swearing an oath as a legal witness (Rev 10:1, 5, 6). This vision appears just before Revelation’s clearest statement regarding the earthly temple in Jerusalem: Revelation 11:1–2 (see next point).

And there was given me a measuring rod like a staff; and someone said, “Rise and measure the temple of God, and the altar, and those who worship in it. And leave out the court which is outside the temple, and do not measure it, for it has been given to the nations; and they will tread under foot the holy city for forty-two months.”

As Witherington notes: “The entire book has been pressing forward toward a conclusion, which is revealed in these two sections [Rev 17 and 22] involving the destruction of Babylon and its replacement by the New Jerusalem.” The witness of the two prophets is to prophesy against the earthly Jerusalem and the earthly Temple, and to announce the heavenly Jerusalem and the heavenly temple. The latter half of the book exactly corresponds to this programme. The earthly Jerusalem, under the figure of Babylon, is doomed and destroyed; the heavenly Jerusalem takes its place. “The whole literary framework of the book becomes clear and simple once the Harlot Babylon is identified with Jerusalem.”

(13) These two women play out the judgment theme in terms of both its negative and positive implications: the harlot is publicly stoned to death for her harlotry (Rev 16:19—17:1) so that the new bride of the Lamb may descend from heaven to take her place on the earth (Rev 21:2, 10). This portrays the judgment and removal of Israel in A.D. 70 so that Christianity might remain as the final redemptive-historical reality (cp. Mt 8:10–12; 19:28; Heb 12:18–28).

(14) The Babylonian harlot’s judgment gives way to a celebratory “marriage supper” (Rev 19:7, 9). This leads to Christ’s judgment-appearing in A.D. 70 as the Avenger-witness who is “Faithful and True” for “in righteousness He judges and wages war” (Rev 19:11).

In a nutshell this is how Revelation’s forensic drama unfolds as it plays out its stated judgment theme (Rev 1:7). I will flesh out this movement in great detail in my commentary, but for now let me consider the redemptive-historical imagery that informs this approach.

I am currently doing research for a commentary tentatively titled: Olivet in Discourse: A Commentary on Matthew 21-25. If you would like to help by donating to my non-profit ministry, I would be grateful for your doing so. For more information, see: GoodBirth Ministries.