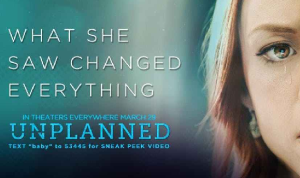 Note: The full title of this article is: “Unplanned: A Deeply Moving Story of a Planned Parenthood Whistleblower.” It is an important movie  exposing the horror of abortion. I highly recommend it. Ken Gentry

The true story of Abby Johnson, a Planned Parenthood clinic director who presided over tens of thousands of abortions. But when she finally sees an actual abortion, her entire life is turned upside down.

I just saw the premiere a couple days ago in Los Angeles. I was blown away. Put it on your calendars NOW to see it opening weekend March 29.

If you care at all, even a little bit, about the issue of abortion in this country, you must see this woman’s story. It is a deeply moving portrait of redemption. It is both gripping and beautiful.

Ashley Bratcher plays Abby Johnson with a fresh innocence, a growing awakening, a broken heart, and a freed soul. Her journey is nuanced, honest and without malice.

All the demons of hell are going to come out against this movie. Why? Because it is good story told well that will move the hearts of anyone with a conscience who watches it.

And it isn’t a propaganda piece. It shows some pro-life protestors at their worst, and all the Planned Parenthood workers at their best. It is honest about the nuances and complexities of the issue of abortion in the real world of women’s lived experiences.

This is not good news for Planned Parenthood. It’s a whistleblower movie about justice that is on the level of Silkwood, The Insider, Erin Brockovich, A Civil Actionand Michael Clayton.

And like those movies, the evil corporate beast seeks to crush the hero.

The powers that be already tried to suppress it by giving it an R-rating, even though it is only a PG-13 movie. . . .

One thought on “UNPLANNED: A DEEPLY MOVING STORY”