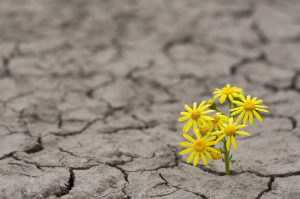 In his letter to the troubled Corinthian church, Paul lists three Christians virtues while exhorting them to a closer walk with Christ: faith, hope, and love (1 Cor. 13:13). This three-fold cord of holy values provides a strong bond of commitment for the Christian, and has tied the Church of Jesus Christ together throughout the ages.

Faith and love are not only beautiful threads knitting together the fabric of the Christian life, but are easily recognized as such. They weave a strong carpet for the Christian walk; they serve as dual strands tugging us forward in our holy calling. And though hope is certainly not a detached thread from the Christian garment, it has been snagged loose and at best is only partially visible to the eye of faith today.

Certainly all Christians are united in recognizing our ultimate, glorious resurrection hope in our heavenly home. We know that the present fallen order is not all that we may expect in our experience of God’s grace. The beatific vision in Scripture encourages us to keep a hopeful eye on heaven above even as we watch our steps in the earth below. And though eternal life in the presence of God is the ultimate hope of the Christian and the abiding consequence of the gospel, it does not exhaust the full significance of biblical hope.

The Scripture urges us not only to look to our eternal estate in heaven, but also to labor in hope in the temporal realm on earth, knowing that “the earth is the Lord’s, and all its fullness, the world and those who dwell therein” (Psa. 24:1). We must remember that this present material order was created by God’s power and for His glory: “You are worthy, O Lord, to receive glory and honor and power; for You created all things, and by Your will they exist and were created” (Rev. 4:11). Consequently, a robust Christian faith must also share in a prophetic hope for our earthly future. Unfortunately though, many evangelicals cannot penetrate the cloud of gloom cloaking our present earthly labors; with troublesome nearsightedness we see only the short-term decline of Christianity rather than its long-range revival.

One reason historical hope is so obscured for us is that, as with the news media, so is it with the modern Christian: We tend to focus on the bad news and overlook the good. Of course, we would certainly be naively foolish if we closed our eyes to the many glaring problems in this rebellious world. But to help us overcome this myopia we must exercise the eye of faith. We should look back at the glowing embers of temporal hope that have flared up in history from time to time. These “thousand points of light” gloriously demonstrate the unquenchable fire of an ever burning Christian hope. These historical specimens provide confirmation of the certainty of the prophetic hope of Scripture. They should encourage us in our faith, love, and hope.

Consider the Old Testament struggle of faith. Childless, aged Abram was called by God to leave his homeland, and “by faith Abraham obeyed when he was called to go . . . and he went out, not knowing where he was going” (Heb. 11:8). Why? Why would a weary old man leave home and country? Because of bright prospect of hope in the future! The ellipsis in the preceding citation from Hebrews notes that he was called “out to the place which he would receive as an inheritance.” An earthly inheritance lay before him, for God Himself promised him: “Go . . . to the land which I will show you; and I will make you a great nation; I will bless you and make your name great; and you shall be a blessing” (Gen. 12:1-2). Abram departed his father’s house for a strange land because of a God-revealed hope of a more fruitful earthly future. Due to Abram’s confidence in God’s earthly promise, his name was change to “Abraham” — “father of multitudes” (Gen. 17:5).

And should we today not follow Abraham’s example, trusting in God’s promise regarding our earthly hope? The Abrahamic Covenant not only brought forth a populous nation of God’s people, but promised that in Abram “all the families of the earth shall be blessed” (Gen. 12:3c). That is, biblical hope promised that from an elderly, barren man would descend not only a great nation in history, but ultimately the Messiah who would bring blessings “to all the families of the earth.”

This glorious One from Abraham’s loins conquered sin (Rom. 7:24-25), death (1 Cor. 15:54-55), and the devil (Col. 2:15) through his redemptive labors. And on that basis redemptively secured the Abrahamic hope of blessing in time and on earth. For Christ commanded his disciples themselves to go out into an alien and resistant world in order to “make disciples of all the nations, baptizing them in the name of the Father and of the Son and of the Holy Spirit” (Matt. 28:19). “All the nations” and “all the families of the earth” are to be brought under the sway of God’s covenant love and Christ’s redemptive kingdom.

The early ante-Nicene church struggled mightily in their task. Initially, they were but a “little flock” (Luke 12:32) who humbly committed their lives to a despised, rejected, and crucified Lord (1 Cor. 2:8). Initially, they were hunted down by the mightiest empire of the world, to be thrown to the beasts for refusing to worship Caesar, to be burned in the fires for affirming Christ’s lordship. Surely their times were fraught with unspeakable terror such as we have not known in modern America. Yet by the grace of God, a little over 200 years after the Apostles left the scene the emperor Constantine professed faith in Christ, lifting the earthly burden from our spiritual forefathers. Christ’s little flock was witnessing His kingdom coming with power, His gospel exercising a growing influence in the world.

Indeed, shortly thereafter Athanasius wrote: “the Saviour works so great things among men, and day by day is invisibly persuading so great a multitude from every side, both from them that dwell in Greece and in foreign lands, to come over to His faith, and all to obey His teaching” (Incarnation 30:4). In ever greater numbers idol worshipers were turning from their lifeless idols to serve the living God (cp. 2 Thess. 1:9). The mustard seed was growing in stature; the leaven was powerfully penetrating the earth (Matt. 13:31-33).

Consider the plight of faithful Christians who were later tormented by a corrupted form of Christianity in the Middle Ages. They were burned at the stake for their evangelical faith in Christ. And though the Church of the day was in such a tragic condition, the Reformation erupted on the scene shaking the very foundations of western civilization. Christians were witnessing the answer to their continuing hope-filled petition to God: “Thy kingdom come; they will be done on earth as it is in heaven.” Once again Christian hope burned anew in time and on earth. The flame of Christ was inextinguishable.

Consider the plight of the bold believers in England as the Reformation flared up there, then died back, only to flame forth again. Faithful ministers were hounded from their pulpits and humble saints beheaded for their faith, taunted as “Puritans.” Yet, as before, the evangelical faith shook itself and arose, bringing forth the Puritan hope and the explosion of a massive Christian missionary outreach. In their earnest hope of serving God without constraints, they migrated to the New Land to establish “a city set on a hill.”

Earthly Hope in the Present

Of course, once again we today look around with growing despair and a deepening concern for our country. Our Christian influence is waning in America. We hear tragic reports of various evils in our land and in the world. What are we to think? Shall our hope fade with the troubling news? May it never be! As did lonely Abram of old, so must we advance in hope of God’s will being effected in the earth which belongs to Him. We should be encouraged by the continuing historical resilience of our faith. What a “great cloud of witnesses” has preceded us!

We must remember the bold hope of Jeremiah. Though he prophesied the fast approaching destruction of Jerusalem, even penning a book of prophecy so disturbing we call it “Lamentations,” yet did he still hope. He looked beyond the dismal events of his day, his eyes penetrating the dark clouds of despair. He was so confident that the earthly future was in God’s hands that he purchased a piece of land in doomed Israel (Jer. 32). He believed that history was indeed “His story,” and not man’s.

We must have a hope such as did righteous Simeon. His beloved nation was subjugated to Imperial Rome. His longed-for Messiah had not come despite hundreds of years of prophetic hope. Yet like Abram and Jeremiah before him, he too continued with hope. He confidently awaited the Messiah in the Temple of God: “And behold, there was a man in Jerusalem whose name was Simeon; and this man was righteous and devout, looking for the consolation of Israel; and the Holy Spirit was upon him” (Luke 2:25). And what became of his hope? He saw in the baby Jesus “Thy salvation, which Thou hast prepared in the presence of all peoples, a light of revelation to the Gentiles, and the glory of Thy people Israel’” (Luke 2:30b-32).

Ultimately, of course, we must draw our hope for the earthly future not from “below the sun,” feeding it solely from an historical tributary. After all, we do not yet see the end result; we can trace only the slow, developing providence of God through the shifting sands of time. Yet we know that He has promised that His kingdom will grow imperceptibly in the earth, like a budding twig (Eze. 17:22-24), a growing stream (Eze. 47:1-12), a developing mustard seed (Matt. 13:31-32), penetrating leaven (Matt. 13:33), a sprouting seed (Mark 4:26-29). Nowhere does the Scripture promise that by the year 2019 will we see the full fruit of a conquering faith and the mature and final blossoming of earthly hope. We must draw our hope from above the sun, from the light of God’s revelation in the prophetic Scriptures. But we can discern the ways of God from his actions in the past in delivering His people and granting them victory despite opposition.

We should no more be discouraged in our hope of the conquest of our faith in the earth because it has not yet transpired in fulness, than we should despair regarding the Lord’s return simply because He has not yet done so. We must have a hope in the future.