THE REAL MEANING OF CHRISTMAS

One of the most remarkable stories of Christmas comes from one of the darkest moments of modern history. World War I ravaged a continent, leaving destruction and debris in its wake. The human cost, well in the millions, staggers us. But from the midst of this dark conflict comes the story of the Christmas Truce of 1914. The Western Front, only a few months into the war, was a deplorable scene of devastation. Perhaps as if to give the combatants one day to breathe again, a truce was called from Christmas Eve through Christmas Day.

As darkness settled over the front like a blanket, the sound of exploding shells and the rat-tat-tat of gunfire faded. Faint carols, in French or English voices on one side and in German voices on the other, rose to fill the silence of the night.

By morning, soldiers, at first hesitantly, began filing out of the maze of trenches into the dreaded and parched soil of No Man’s Land. There was more singing. Gifts of rations and cigarettes were exchanged. Family photos were passed around. Soccer balls appeared. Up and down the Western Front, soldiers, who only hours before had been locked in deathly combat, now faced off in soccer games.

For one brief but entirely remarkable day, there was peace on earth. Some have called the Christmas Truce of 1914 “the Miracle on the Western Front.”

The Glory of Christ (book by R. C. Sproul)

From the angels’ revelation of Jesus’ glory to the shepherds outside Bethlehem,

to Jesus’ life-changing revelation of His glory to Paul on the Damascus road, Sproul guides us to a deeper understanding of Christ’s glory.

Anxious to print some good news, The Times of London reported on the events of the Christmas Truce. Soldiers recorded the day in letters home and in diaries. Some of those lines made it to newspapers, while others remained unknown until later brought to light. Here’s one such line from the diary of a German infantryman:

The English brought a soccer ball from the trenches, and pretty soon a lively game ensued. How marvelously wonderful, yet how strange it was. The English officers felt the same way about it. Thus Christmas, the celebration of Love, managed to bring mortal enemies together as friends for a time.

“Friends for a time,” “the celebration of love,” “peace on earth”—this is the meaning of Christmas. But these celebrations, these truces, don’t last. After Christmas Day, the soccer balls and the soldiers went back into the trenches. The Christmas carols subsided and the war carried on. And even though World War I eventually ended, a few decades later, Europe’s countryside and cities became the field of battle once again, as did Africa and the Pacific, during World War II.

Events like the Christmas Truce are worth celebrating. But they lack something. They lack permanence. Such impermanent peace is what we often find in our quest for the real meaning of Christmas. If we are looking for permanent and ultimate goodwill, love, and peace, we must look beyond our gift-giving, get-togethers, and office parties. We must look to no other place than to a manger.

We must look to a baby born not with fanfare, pomp, and circumstance, but to poor parents in desperate times. Joseph and Mary, and the Baby Jesus for that matter, were real historical figures. But in a way, Joseph and Mary extend beyond themselves, beyond their particular place and time. They represent all of us. We are all poor and living in desperate times. Some of us are better than others at camouflaging it. Nevertheless, we are all poor and desperate, so we all need the promise bound up in that baby.

We are in need of a way out of our poverty of soul and the desperate state of our human condition. We find it in this child lying in a manger, who was and is Jesus Christ, the long-promised Messiah, Seed, Redeemer, and King.

The birth of Jesus so many centuries ago might have been a slightly-out-of-the-ordinary birth. Even in ancient times, stalls didn’t typically double as birthing rooms and mangers didn’t typically double as cribs for new-born babies. And that newborn baby was very much out of the ordinary. Of course, in some respects, He was perfectly ordinary. He was a human being, a baby. He got hungry. He got thirsty. He got tired. When He was born, He was wrapped in swaddling clothes—the ancient equivalent of Pampers.

Yet, this child was the Son of God incarnate. He was Immanuel, which translated means “God with us.” According to the Apostle Paul’s account, this infant created all things. This infant created His own manger. And this infant, this King, brings peace on earth, ultimate and permanent peace. 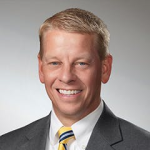 Dr. Stephen J. Nichols is president of Reformation Bible College and chief academic officer for Ligonier Ministries, and teaches on the podcast 5 Minutes in Church History.

3 thoughts on “THE REAL MEANING OF CHRISTMAS”