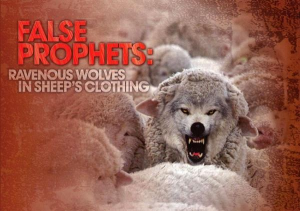 Point 4:
Postmillennialism is the biblical anecdote to failed predictions of Christ’s Second Coming.

Postmillennialism, with a preterist view of the Great Tribulation, refutes the numerous failed predictions, which have undermined the credibility of the modern evangelical church, that Jesus is coming soon to rapture Christians out of the world.

There have been declarations by Christians at various times over the past two thousand years that Christ’s return was near. However, those predictions have escalated since the invention of Dispensational theology in the 1830’s, adopted by many orthodox Christians as well as by cults like Mormonism and Jehovah’s Witnesses in modified versions. Here is a list of some of these failed predictions:

Since the Bible gives fulfillment of prophecy as a test of whether a prophecy is truly from God (Deut. 18:21-22), these false predictions undermine the credibility of the Bible. Of course, these false predictions can be attributed to faulty interpretations of the Bible rather than the Bible itself; but even with that, the false predictions shows to non-Christians that Christians are not very good students of the book that they want everyone to believe and obey. Whether the Bible or modern Christians are to blame, it is one more reason for non-Christians to think that Christians and their religion shouldn’t be taken seriously. As I showed in the last post, the preterist view, that the Great Tribulation occurred in the first century A.D., has abundant evidence for it. Since such awful destruction is in our past, it supports the postmillennial position that the predictions of worldwide conversions to Christianity and material prosperity are in our future.

Amillennialists will argue that their view also avoids the embarrassment of setting failed dates for Christ’s return because they teach that the return of Christ has been “imminent” over the entire course of church history, meaning that Christ could return at any time in history. The problem with this is that it misinterprets Christ’s statements that the Kingdom of God was “imminent.” Those passages are not talking about God’ kingdom coming and Christ’s return happening at any unpredictable moment over the next thousand years. Jesus said the coming of His kingdom was “at hand” (Matt. 3:2, 4:17, 10:7; Mark 1:15; Luke 10:9, 10:11, 21:31) but this means “close” or “soon” – not at an unpredictable time over the next several thousand years (compare to Matt. 26:45, 46). Christ came to establish His kingdom at His first coming, and He came in judgment against Jerusalem in the first century, culminating with the destruction of the Jerusalem Temple in A.D. 70., although this was not a bodily coming to earth.