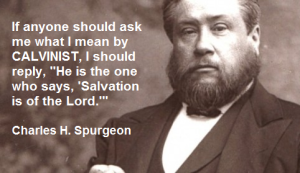 What comes to your mind when you hear the word “Calvinist”? A grumpy, cold-hearted person who only wants a select few people to get into heaven? An annoying guy who won’t stop rambling on about Romans 9? That awful, sterile, passionless church you used to go to?

Calvinism doesn’t have a fantastic reputation, at least in some circles. Some people feel like it focuses more on theology than on loving people. Others have had really bad experiences with Calvinists. And some people think it runs counter to the beautiful free offer of grace found in the Bible.

But what if someone who is not a jerk (at least most of the time) could talk about Calvinism in a way that didn’t make you want to smash your computer?

That’s what I’m going to try to do in this post. I want to explain why I’m a Calvinist, why it brings me great joy, and why I think it’s profoundly biblical. If at the end you disagree with me, that’s okay. We can still be BFS (best friends sometimes).

I can’t answer all your objections in this post. I’m not intending to turn this into a furious, spittle-flying debate. Think of this as a pleasant conversation over a craft beer (or coffee if you’re a Baptist).

Includes more than thirty short, pointed essays, sermons, and addresses that summarize some of John Frame’s central (and sometimes peripheral!) ideas about the nature and method of theology, theological issues, epistemology, apologetics, the church, and ethics.

What Is A Calvinist?

Before we dive off the deep end, I should take a minute to define what I mean by Calvinism. A simple definition is this:

Calvinism is a series of doctrines that describes the state of humanity apart from God, how God saves people, and how God will ultimately bring those people to Glory.

A common acronym used to remember the doctrines of Calvinism is:

I don’t like some of the phrases in the acronym and I think they can be confusing but it’s what most people use.

Because It’s All Over The Bible

I am not a Calvinist because of John Calvin. In fact, if John Calvin never existed I would still be a Calvinist (except it wouldn’t be called “Calvinism”). I don’t have man-crush on Calvin, nor do I think he’s the greatest person since Jesus. I won’t name any of my kids “Calvin”.

Calvin simply took some biblical ideas and organized them. Actually, I prefer the term “Doctrines of Grace” rather than Calvinism. It better describes the doctrines. Plus it takes the focus off John Calvin who, just like everyone else, had some great strengths and wicked weaknesses.

Lord of the Saved

A critique of easy believism and affirmation of Lordship salvation. Shows the necessity of true, repentant faith to salvation.

I believe in the doctrines of grace because they run throughout the entire Bible, like a golden thread from Genesis to Revelation. In the Old Testament, we see that God unconditionally chose Israel to be his people….

9 thoughts on “5 REASONS I’M A CALVINIST”