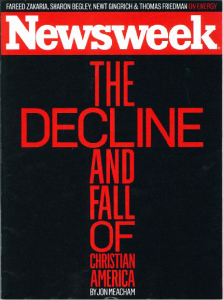 Introductory note by Ken Gentry:
In the article below you will find an analysis of the decline of Christianity in America and a proposal for engaging the post-Christian culture we now face. As a postmillennialist I believe Christ’s gospel will one day dominate the world as the major personal, social, and cultural influence among men. We have seen its power in the past, but we are witnessing its decline in the present. This is a tragedy that needs to be reversed, and will be reversed  — according to Scripture.

In this regard postmillennialists must take heart by remembering three things:

(1) The postmillenial hope unfolds gradually over time, with fits-and-starts, like the individual’s personal sanctification. We should not look at the crisis of the moment and despair regarding the future. After all, “The kingdom of heaven is like a mustard seed, which a man took and sowed in his field; and this is smaller than all other seeds, but when it is full grown, it is larger than the garden plants” (Matt 13:31-32).  We must not be newspaper exegetes; but good-news exegetes. That is, we must look to Scripture for our hope, for in it is the good news of the gospel.

(2) The prophetic hope of Scripture promises that before the end, Christ will win the victory. And we do not know when the end will be. We have no Hal Lindsey in our camp who can accurately predict it. We have no one who can write a 1980’s: Countdown to Armageddon or Planet Earth 2000 AD: Will Mankind Survive? So we must keep laboring for the Master while understanding that he holds the future in his hands. After all, “He must reign until He has put all His enemies under His feet” (1 Cor 15:25).

(3) God does not need America; America needs God. It may be that God is setting aside America and will let her collapse to show that . . . in fact, America does need God. We are not interested in civil religion, but biblical religion. We are seeking true revival in the churches that will overflow into the wider culture. After all, “If My people who are called by My name humble themselves and pray and seek My face and turn from their wicked ways, then I will hear from heaven, will forgive their sin and will heal their land” (2 Chron 7:14).

But now for the opening section of the insightful Christianity Today article by Ed Stetzer. At the end of the blog article you will be able to click on a link that takes you to the full article.

“American culture is becoming less conducive to Christian values—it’s a reality. The question is: what will the church do?”

Whether we admit it or not, many evangelicals in America believe, deep down, that the church in America is the hope for Christianity and the spread of the gospel worldwide.

Saving Freedom (by Sen. Jim DeMint)
(Former) Senator DeMint’s firsthand account of the unsettling
socialist shift—behind-the-scenes actions in Congress
that are changing the character of our nation.

In some ways that’s an unhelpful impulse, particularly when you consider how well the Global South church is doing compared to the church in the Western world. Yet, when you look at our actions, we seem to think we’ve got it all figured out, when that clearly is not the case.

For a number of reasons, I believe that there are actually a few countries not normally considered “evangelical powerhouses” from which Christian movements may be sparked that could affect the global spread of the gospel.

I can’t point to the particular place it might occur, but I believe I could point to the type of church culture in which revival could easily break out. I could also point to where, at least for a while, it’s probably not going to happen—American church culture.

American evangelicals are facing important decisions as to who we are going to be and how we are going to address the constantly changing culture around us. However, I think that movements are more likely to happen in places where Christian faith is more marginalized, rather than battling for the center.

The Church and Culture

Culture and religion in the United States has morphed in a way that will cause our churches to wander with uncertainty for decades, unsure of what it is they’re supposed to do to engage their culture. We have already begun the journey, and churches don’t know if they’re supposed to battle the culture, defeat it, slay it, withdraw from it, or embrace it.

It is a tricky time.

Movements come for many reasons—and they are deterred by many other reasons.

Yet, one of those reasons has to be the uncertainty with which we are engaging culture around us.

For example, how can we expect people to be open to the gospel we preach when we’ve just called them bad names on Facebook for their political views? I’ve written on this before, in what became a controversial and well-read article, but it is part of the issue.

Engaging from the Edge and not the Center

American evangelicalism must learn how to engage culture from the edges instead of the center. Why? The church is no longer the epicenter of political and social circles.

I’m not saying that this is all a good thing. I don’t think, for example, that we should celebrate the decline in self-identified Christians in recent surveys.

Yet, the fact is that we increasingly are at the margins, and that also provides an opportunity.

But for the most part, our churches are still poised for ministry in the old cultural mindset. They expect to be heard and respected. They expect to have the power. They expect culture to fall in line under the leadership of the church, but culture is just not listening.

Until American churches understand how to live and work in our specific version of an increasingly post-Christian culture, they will struggle with effectiveness for the gospel.

Prodigal Press:
Confronting the Anti-Christian Bias of the American News Media
By Marvin Olasky and Warren Cole Smith
Issuing a clarion call for Christians to reclaim American journalism, Olasky and Smith examine the influence of worldviews on reporting, objectivity, sensationalism, and crusading;
the impact of legal, ethical, and technological changes;
and the changes brought about by the 24/7 news cycle, the Internet, and social media.
For more Christian educational materials see: www.KennethGentry.com

I say our specific culture because we also need to realize that we are not other countries or continents. I hear it said all the time that Europe is the future of the United States. I get the sentiment that Europe is post-Christian, but it is not post-Christian America….

2 thoughts on “POSTMILLENNIALISM AND POST-CHRISTIAN AMERICA”