THE BEASTS OF REVELATION

In Revelation 13:1–2 we are introduced to the beast from the sea who will play a prominent role in Revelation from this point forward: “I saw a beast coming up out of the sea, having ten horns and seven heads, and on his horns were ten diadems, and on his heads were blasphemous names. And the beast which I saw was like a leopard, and his feet were like those of a bear, and his mouth like the mouth of a lion. And the dragon gave him his power and his throne and great authority.”

We must understand the “first beast” in Rev 13 both generically and individually. This is not unusual in Scripture: Christ’s body is generic (the church) and specific (Jesus); Adam is generic (man) and specific (Adam). Generically the “beast” is Rome; individually it is Nero Caesar, the head of the Roman Empire of the day. END_OF_DOCUMENT_TOKEN_TO_BE_REPLACED

THE POWER OF FICTION FOR PRETERISM

If you are like me, a postmillennial redemptive-historical preterist, you have been deeply disturbed by the past huge success of Left Behind, as well as the current financial siphon of speculative novels on the book of Revelation. Is this concern because of greed or envy for the success of others? May it never be. My sadness is because I think it represents the spirit of the age: a hunger for conspiracy theories. In this world of obsession with narrative over facts, even Christians are more drawn to sensational fantasies of the end times than to the real-world glory of the Gospel in the Kingdom of God. Futurists (like Left Behinders) seem more interested in the coming of the “Antichrist” than in the coming of Christ, or rather, than in the current reign of Jesus Christ over all (Eph 2:20-22). END_OF_DOCUMENT_TOKEN_TO_BE_REPLACED 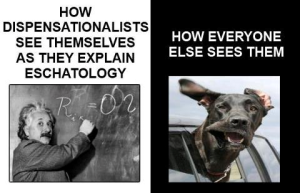 Revelation is a book as fascinating as it is difficult. Unfortunately, it is made more difficult by approaching it in the wrong way and viewing it through out-of-focus lenses. In our day the naive dispensational view is the dominant evangelical approach to eschatology — despite its many and continuing failed predictions of the date of the rapture and its erroneous identitifying of the Antichrist.

So many Christians have been raised in this system that they cannot even understand any other approach. This makes reasoning with them extremely difficult. In fact, reasoning with a populist dispensationalist is a lot like saddling a cow: It is a whole lot of work and there is not much point in it. END_OF_DOCUMENT_TOKEN_TO_BE_REPLACED

666 AS A HEBREW MISSPELLING?

Caesar. In this final reply to the preterist opponents, I will answer the question:
What about the defective spelling? To get the proper value of 666 out of the name Nero Caesar requires an unusual spelling of his name.

This problem is not insuperable, for we do find this spelling in Aramaic documents from Nero’s reign. Who is to say John could not use a defective spelling, especially one which we actually find from that time period? END_OF_DOCUMENT_TOKEN_TO_BE_REPLACED

In my previous blog (PMT 2014-032) I began considering an objection to the postmillennial, preterist’s

understanding of 666. We believe it has John using a Hebrew spelling of “Nero Caesar” for understanding his meaning. Some reject this analysis because Revelation was written to Asia Minor and not to Israel.

I offered two replies to this objection in my last blog. Below I will continue responding to it, continuing the enumeration began previously.

Third, the local population
This objection against our analysis of 666 overlooks the social context of the Asian churches. Asia Minor was heavily populated by diaspora Jews. The Jewish population in the empire was between six and seven million, with the “largest concentrations of Jewish settlements” in Egypt, Palestine, Syria, and Asia Minor (John’s direct audience) (Mayo, Those Who Call Themselves Jews [2006: 30, 62]). [1] END_OF_DOCUMENT_TOKEN_TO_BE_REPLACED

THE RESTRAINER AND THE MAN OF LAWLESSNESS

This is my fourth and final installment (for the time being!) on Paul’s Man of Lawlessness. Though it is a difficult passage, it serves as a foundation stone to peculiar dispensational beliefs involving the rebuilt temple and the re-institution of animal sacrifices. I have been showing, however, that this passage is dealing with first century concerns, not last century ones. We will see this further in today’s installment.

The Restrainer at Work

In 2Th. 2:7 we read: “for the mystery of lawlessness is already at work; only he who now restrains will do so until he is taken out of the way.” When Paul writes 2 Thessalonians 2, he is under the reign of Claudius Caesar. In this statement he even seems to employ a word play on Claudius’ name. Let’s see how this is so. END_OF_DOCUMENT_TOKEN_TO_BE_REPLACED

THE MAN OF LAWLESSNESS PROBLEM

A PostmillennialismToday reader recently wrote and asked how postmillennialism can be true in light of such passages as 2 Thessalonians 2 regarding the Man of Lawlessness. He stated: “The biggest problem I’ve had with postmillennialism is the falling away: “Let no man deceive you by any means: for that day shall not come, except there come a falling away first, and that man of sin be revealed, the son of perdition” (2 Thes 2:3).” Certainly for an eschatological to be true it must be able to account for all passages in Scripture. And postmillennialism can explain this passage of evil foreboding. Let us see how! END_OF_DOCUMENT_TOKEN_TO_BE_REPLACED