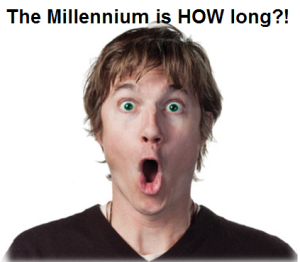 I am beginning a two-part series on the millennium. I will be highlighting how its significance in eschatological discussions is exaggerated. I am calling for balance on this issue.

Revelation 20:1–6 present us with a time frame that plays a far greater role in the eschatological debate than it warrants. Oddly, Stanley J. Grenz asserts of “evangelical postmillennialists” that “as a millenarian viewpoint, of course, it builds its primary case from a futurist interpretation of John’s vision.” This is simply not so. As I show in chapter 3 and argue in my chapter in Three Views on the Millennium and Beyond, “I would prefer to leave Revelation 20 out of my presentation.” In their debate book Antony Hoekema scolds postmillennialist Loraine Boettner for not dealing with Revelation 20:1–6 in his argument for postmillennialism.

Incredibly, this passage dominates the thinking of various eschatological schools. But amillennialist William Cox wisely argues: “Most millennial thinking begins with Revelation 20, since this is the only place in the entire Bible where the thousand years is mentioned. We feel that Revelation 20 ought to be our last stop, not our first.” Indeed, “this is one of the most hotly debated issues in the whole field of eschatology.” Grant Osborne reminds us that “few issues have divided the church for as long a time as this, for the church in the first three centuries had extensive debates over ‘chiliasm.’”

Adam in the New Testament

Carefully examining key passages of Scripture, Versteeg proves that all human beings descended from Adam, the first man. He argues that if this is not true, the entire history of redemption documented in Scripture unravels and we have no gospel in any meaningful sense.

Premillennialism’s depending on Revelation 20 is surprising for at least two major reasons. First, the only place in all of Scripture that associates “one thousand years” with the reign of Christ is in the first six verses of this one chapter. Against such a complaint, premillennialist Ladd comments: “the fact that the New Testament in only one place teaches an interim kingdom, between this age and the Age to Come is no reason for rejecting it.” Yet the postmillennial concern is well-justified. If a literal earthly millennium is a prominent era in redemptive history, the very goal of history (as premillennialists and dispensationalists argue), then why should we not expect a reference to the thousand years appearing in more than one passage?

Second, the thousand-year reign occurs in the most figurative and difficult book in all of Scripture. If it is a literal time frame, why is it that it is only mentioned in this highly symbolic book? It is a bit odd, too, that this time frame is a perfectly rounded and exact multiple of ten, which seems more compatible with a figurative view.

B. B. Warfield is surely correct when he comments: “we must not permit ourselves to forget that there is a sense in which it is proper to permit our understanding of so obscure a portion of Scripture to be affected by the clearer teaching of its more didactic parts. . . . The order of investigation should be from the clearer to the more obscure.” But dispensationalists and premillennialists seldom honor this hermeneutical principle. In fact, “nothing, indeed, seems to have been more common in all ages of the Church than to frame an eschatological scheme from this passage, imperfectly understood, and then to impose this scheme on the rest of Scripture vi et armis.”

Historic premillennialist Chung complains: “Many Reformed theologians . . . spiritualize key passages of the Bible that must be interpreted more literally from the kingdom perspective. For example, many Reformed covenant theologians have taken Revelation 20:1–6 as a metaphorical account, denying the fulfilment of the physical millennial rule on the earth.”

Robert Clouse well notes: “These categories [amillennial, premillennial, postmillennial], although helpful and widely accepted, are in certain respects unfortunate as the distinctions involve a great deal more than the time of Christ’s return.” Nevertheless, as I note above, amillennialist Hoekema scolds postmillennialist Boettner for not dealing with Reve-lation 20:1–6 in his presentation of the postmillennial conception of the kingdom.

To be continued. Don’t worry the Rapture hasn’t happened. I will be back.

2 thoughts on “THE EXAGGERATED MILLENNIUM (1)”