THE TEMPLE IN REVELATION 11 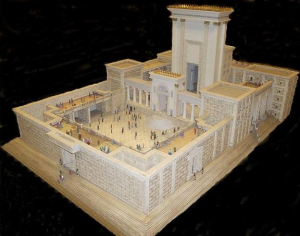 PMW 2021-052 by Kenneth L. Gentry, Jr.
Revelation is an important book in eschatological discussions. The most vigorous Revelation debate in ecclesiastical circles today revolves around the dispute between preterism and futurism. Preterism holds that Revelation was largely fulfilled not long after John wrote it. Futurism holds that it deals largely with events yet to come.

Because of this debate, the identity of the temple in Rev 11 arises as a serious matter. In Revelation 11:1, 2 we read:

And there was given me a reed like unto a rod: and the angel stood, saying, Rise, and measure the temple of God, and the altar, and them that worship therein. But the court which is without the temple leave out, and measure it not; for it is given unto the Gentiles: and the holy city shall they tread under foot forty and two months.

Here we find a Temple standing in a city called “the holy city.” Surely John, a Christian Jew, has in mind historical Jerusalem when he speaks of “the holy city.” This seems necessary in that John is writing scripture and Jerusalem is frequently called the “holy city” in the Bible. For example: Isaiah 48:2; 52:1; Daniel 9:24; Nehemiah 11:1-18; Matthew 4:5; 27:53.

In addition, verse 8 informs us that this is the city where “also our Lord was crucified.” This was historical Jerusalem, according to the clear testimony of Scripture (Luke 9:22; 13:32; 17:11; 19:28). Interestingly, historical Jerusalem is never mentioned by name in Revelation. This may be due to the name “Jerusalem” meaning “city of peace.” In Revelation the meanings of specific names are important to the dramatic imagery. And so it would be inappropriate to apply the name “Jerusalem” to the city upon which woe and destruction are wreaked.

Now what Temple stood in Jerusalem? Obviously the Jewish Temple ordained of God, wherein the Jewish sacrifices were offered. In the first century it was known as Herod’s Temple. This reference to the Temple must be that historical structure for four reasons:

(1) It was located in Jerusalem, as the text clearly states in verse 8. This can only refer to

the Herodian Temple, which appears over and over again in the New Testament record. It was the very Temple which was even the subject of one of Christ’s longer prophetic discourses (Matt. 23:37-24:2ff).

(2) Revelation 11:1, 2, written by the beloved disciple and hearer of Christ, seems clearly to draw upon Jesus’ statement from the Olivet Discourse. In Luke 21:5-7, the disciples specifically point to the Herodian Temple to inquire of its future; in Revelation 11:1 John specifically speaks of the Temple of God. In Luke 21:6 Jesus tells his disciples that the Temple will soon be destroyed stone by stone. A comparison of Luke 21:24 and Revelation 11:2 strongly suggests that the source of Revelation’s statement is Christ’s word in Luke 21.

• Luke 21:24b: “Jerusalem will be trampled underfoot by the Gentiles until the times of the Gentiles be fulfilled.”

• Revelation 11:2b: “it is given unto the Gentiles: and the holy city shall they tread under foot for forty and two months.”

The two passages speak of the same unique event and even employ virtually identical terms.

(3) According to Revelation 11:2 Jerusalem and the Temple were to be under assault for a period of forty-two months. We know from history that the Jewish War with Rome was formally engaged in Spring, A.D. 67, and was won with the collapse of the Temple in August, A.D. 70. This is a period of forty-two months, which fits the precise measurement of John’s prophecy. Thus, John’s prophecy antedates the outbreak of the Jewish War.

(4) After the reference to the destruction of the “temple of God” in the “holy city,” John later speaks of a “new Jerusalem” coming down out of heaven, which is called the “holy city” (Rev. 21:2) and which does not need a temple (Rev. 21:22). This new Jerusalem is apparently meant to supplant the old Jerusalem with its temple system. The old order Temple was destroyed in August, A.D. 70.

Thus, while John wrote, the Temple was still standing, awaiting its approaching doom. If John wrote this twenty-five years after the Temple’s fall it would be terribly anachronous. The reference to the Temple is hard architectural evidence that gets us back into an era pre-A.D. 70.

4 thoughts on “THE TEMPLE IN REVELATION 11”