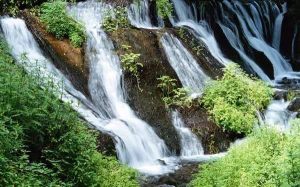 In my 9/5/19 post regarding Babylon as an image of Jerusalem in Revelation, Fred V. Squillante responded:

“Revelation 17:1 says that the woman sits on many waters. Verse 15 says The waters where the harlot sits are peoples and multitudes and nations and tongues. The woman is sitting on the beast (many waters). This can only mean the Roman Empire.”

Then one of the seven angels who had the seven bowls came and spoke with me, saying, “Come here, I will show you the judgment of the great harlot who sits on many waters” (v. 1).

And he said to me, “The waters which you saw where the harlot sits, are peoples and multitudes and nations and tongues” (v. 15).

This is a frequent challenge brought against the Babylon=Jerusalem interpretation. And it certainly offers a reasonable interpretation. In fact, it is a key argument in favor of the identity of the harlot as Rome among standard preterists (as opposed to my Redemptive-historical preterism, which sees the bulk of Revelation as directed against Jerusalem and Israel). Thus, it deserves a response. I will provide a two part response, beginning in this posting and continuing in the next.

In Rev. 17, the angel states of the “the great harlot” that she “sits on many waters (17:1c). How shall the Redemptive-historical Preterist respond? I believe there is abundant evidence that this can easily apply to Jerusalem. Let’s see how this is so.

It is well-known that John is taking up the mantle of an OT prophet. He intentionally mimics their style, even alluding to their words. That is, he uses Greek grammar that intentionally suffers from Hebrew interference (Hebraisms) and he employs over 400 allusions to the OT (the most of any book in the NT). That being the case, it would appear that he is alluding to Jer 51:12–13 which refers to OT Babylon’s complex network of canals on the Euphrates: “Lift up a signal against the walls of Babylon; / Post a strong guard, / Station sentries, / Place men in ambush! / For the LORD has both purposed and performed / What He spoke concerning the inhabitants of Babylon. / O you who dwell by many waters, / Abundant in treasures, / Your end has come, / The measure of your end.”

Yet In light of the abundant evidence for Babylon representing Jerusalem in John’s judicial drama against Israel, we should look in another direction for testing these waters, you might say. What is the proper interpretation of her sitting on “many waters” (17:1) representing “peoples [laoi] and multitudes [ochloi] and nations [ethnē] and tongues [glōssai]” (17:15)? These statements signify two significant realities.

Babylon-Jerusalem’s ruling influence is exercised over the vast population of diaspora Jews. If taken in terms of her authority over diaspora Jews derived from many nationalities, Jerusalem eminently qualifies for such a description. This would include its many non-Jewish proselytes, for “in the Graeco-Roman period, there is evidence of many converts to Judaism, as well as of sympathizers, or God-fearers” (Dictionary of Judaism in the Biblical Period, 505).

In fact, Louis Feldman (in Shanks, Christianity and Rabbinic Judaism, 5) speaks of “the outstanding success of Jewish proselytism.” He notes further that “the vast expansion of Judaism through proselytism may also have made the Romans nervous.”

J. M. G. Barclay (Jews in the Mediterranean Diaspora, 299) mentions that Dio (57:18:5a) “asserts that the expulsion [of Jews from Rome under Tiberius in AD 19] took place because the Jews were converting many Romans to their customs.” Albert Bell (A Guide to the New Testament World, 95) agrees: “throughout the first century or so of the empire the Jews in Rome were numerous and aggressive proselytizers, so aggressive that they were expelled under Tiberius and again under Claudius.” (see: Tac. Ann. 2:85; Hist. 5:5; Suet. Claudius 25).

Josephus states that the Jews “also made proselytes of a great many of the Greeks perpetually” (J.W. 7:3:3 §45). The Mishnah, Talmud, and other rabbinic documents commonly mention the proselytes. Douglas Hare (The Theme of Jewish Persecution of Christians in the Gospel according to St. Matthew, 9) comments: “the eagerness with which proselytes were sought and the success of such efforts are attested by pagan, Jewish and Christian writers of the period.” The ancient Jews saw the diaspora as God’s goodness toward the Gentiles in sowing the Jews among them: “The Holy One, Blessed be He, did righteousness in Israel in that he ‘scattered’ them amongst the nations” (b. Pes. 87b).

We know from abundant literary and archaeological evidence that the diaspora was a powerful minority throughout the empire. Philo (Flacc. 45-46) writes that “no one country can contain the whole Jewish nation, by reason of its populousness; on which account they frequent all the most prosperous and fertile countries of Europe and Asia, whether islands or continents, looking indeed upon the holy city as their metropolis in which is erected the sacred temple of the most high God.” He writes to the emperor Caligula (Embassy 36 §281-284]):

Concerning the holy city I must now say what is necessary. It, as I have already stated, is my native country, and the metropolis, not only of the one country of Judaea, but also of many, by reason of the colonies which it has sent out from time to time into the bordering districts of Egypt, Phoenicia, Syria in general, and especially that part of it which is called Coelo-Syria, and also with those more distant regions of Pamphylia, Cilicia, the greater part of Asia Minor as far as Bithynia, and the furthermost corners of Pontus. and in the same manner into Europe, into Tessaly, and Boeotia, and Macedonia, and Aetolia, and Attica, and Argos, and Corinth and all the most fertile and wealthiest districts of Peloponnesus. And not only the continents full of Jewish colonies, but also all the most celebrated islands are so too; such as Euboea, and Cyprus, and Crete. I say nothing of the countries beyond the Euphrates, for all of them except a very small portion, and Babylon, and all the satrapies around, which have any advantages whatever of soil or climate, have Jews settled in them. So that if my native land is, as it reasonably may be, looked upon as entitled to a share in your favour, it is not one city only that would then be benefited by you, but ten thousand of them in every region of the habitable world, in Europe, in Asia, and in Africa, on the continent, in the islands, on the coasts, and in the inland parts, And it corresponds well to the greatness of your good fortune, that, by conferring benefits on one city, you should also benefit ten thousand others, so that your renown may be celebrated in every part of the habitable world, and many praises of you may be combined with thanksgiving.

When writing of the Jews who come to the temple feasts, Philo speaks of “innumerable companies of men from a countless variety of cities” (Spec. Laws 1:12 (§69-70).

Josephus records Agrippa’s speech attempting to quell the growing revolt against Rome. Agrippa states that “there is not a people in the world [epi tēs oikumenēs] which does not contain a portion of our race” (J.W. 2:16:4 §398; cp. Ap. 2:282). Josephus (J.W. 7:3:3 §43) himself states: “For as the Jewish nation is widely dispersed over all the habitable earth among its inhabitants, so it is very much intermingled with Syria by reason of its neighborhood, and had the greatest multitudes in Antioch by reason of the largeness of the city.” He mentions “a great multitude of Jews who dwelt in their [Ionian] cities” (Ant. 16:2:3 §27–28). Strabo of Cappadocia complains: “Now these Jews are already gotten into all cities; and it is hard to find a place in the habitable earth that hath not admitted this tribe of men, and is not possessed by them” (Ant. 14:7:2 §115) We should not be surprised, since God promises that Abraham will be a “father of many nations [ethnōn]” (Ge 17:5; Ro 4:17-18).

John’s image well fits the NT witness elsewhere, for in Ac 2:5 we read that at Pentecost there are “Jews living in Jerusalem, devout men, from every nation [pantos ethnous] under heaven.” In addition, Luke’s description of their surprise at the phenomenon of tongues highlights the matter: “how is it that we each hear them in our own language to which we were born? Parthians and Medes and Elamites, and residents of Mesopotamia, Judea and Cappadocia, Pontus and Asia, Phrygia and Pamphylia, Egypt and the districts of Libya around Cyrene, and visitors from Rome, both Jews and proselytes, Cretans and Arabs — we hear them in our own tongues [glōssais] speaking of the mighty deeds of God” (Acts 2:8-11). Ac 4:27 speaks of “the peoples [laois] of Israel” who were “gathered together against Thy holy servant Jesus.”