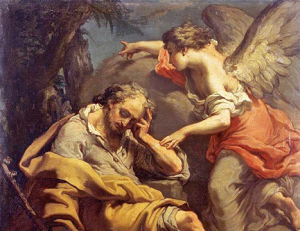 It has been said that wherever you find five Revelation commentaries, you will discover six different Revelation outlines. Outlining Revelation is a difficult task due to its cyclical and repetitive movement. For instance, in it appear cycles of seven: seven seals, seven trumpets, and seven vials. But these appear to be rehearsing the same information.

Nevertheless, outlining Revelation is an important, though difficult, task that can be accomplished. The structuring of Revelation should emphasize its judicial character, since we see one judgment of God after another in its unfolding story.

Though Revelation may be outlined in several different ways, its most basic framework is structured around John’s four “in Spirit” (Greek: en pneumati) experiences (1:10; 4:2; 17:3; 21:10). This phraseology only appears four times in Revelation. And they highlight Revelation’s simplest, most basic structural feature, presenting the material in four primary visions, which point to four major transitions within the whole vision.

Rev 1:10 “I was in the Spirit on the Lord’s day, and I heard behind me a loud voice like the sound of a trumpet.”

Rev 4:2 “Immediately I was in the Spirit; and behold, a throne was standing in heaven, and One sitting on the throne.”

Rev 17:3 “He carried me away in the Spirit into a wilderness; and I saw a woman sitting on a scarlet beast, full of blasphemous names, having seven heads and ten horns.”

Rev 21:10 “He carried me away in the Spirit to a great and high mountain, and showed me the holy city, Jerusalem, coming down out of heaven from God.”

This simple structuring of the book picks up on this distinctive phrasing that highlights John’s prophetic experience (1:10; 4:2) and Spirit-transport (17:3; 21:10).

Associated with each occurrence of the “in the Spirit” phraseology, we find John appearing in a ifferent location. Each location is radically different from the others.

“I, John, your brother and fellow partaker in the tribulation and kingdom and perseverance which are in Jesus, was on the island called Patmos.”

In today’s context, the second “in the spirit” (Rev. 4:2) statement, we find John transported from Patmos on the earth to heaven:

The next appearance of “in the Spirit” occurs in Rev 17:3, where John is carried back down to the earth into a wilderness:

Rev 17:3a: “he carried me away in the Spirit into a wilderness.”

The final appearance of “in the Spirit” is in Rev 20:10, where John is moved from the low-lying wilderness to a great, high mountain:

Rev 21:10a “He carried me away in the Spirit to a great and high mountain.”

Thus, John’s “in the Spirit” experiences have him placed in different locations to receive different revelations from God.

The “in the Spirit” movements have judicial implications that are significant for the judgment scenes of Revelation.

The first “in the Spirit” section

The first “in the Spirit” location appears in Rev 1:9-3:22. This one shows John under judicial censure on Patmos to where Rome banishes him. While there, Christ directs him to write Revelation and to send it to the seven churches (1:11). In the following seven letter-oracles Christ will engage an investigative judgment of the churches.

So then, this first vision is designed to promote repentance and faithfulness in the seven churches by threatening judgment.

The second “in the Spirit” section

The second “in the Spirit” experience escorts John into heaven (4:1-2a), where he sees God’s judgment throne and his heavenly judicial courtroom (4:2b-4). There we see the lightning and thunder (4:5) which signify the terrifying theophany from which the judgments flow out against God’s enemies (4:1-16:21). While there in the Spirit John witnesses a session of the divine council (4:1-5:14), which results in a seven-sealed judgment scroll being given to Christ (5:1-4), who will open the seals and unleash the judgments (5:9; 6:1ff).

The third and fourth “in the Spirit” sections

The third (17:1-21:8) and fourth sections (21:9-22:5) have strong introductory parallels, establishing a clear relationship between them and a climax to the whole judicial procedure. Note the parallels:

17:1: “Then one of the seven angels who had the seven bowls came and spoke with me, saying, ‘Come here, I will show you the judgment of the great harlot who sits on many waters…. [17::3] And he carried me away in the Spirit into a wilderness; and I saw a woman sitting on a scarlet beast, full of blasphemous names, having seven heads and ten horns.’”

21:9-10: “Then one of the seven angels who had the seven bowls full of the seven last plagues came and spoke with me, saying, ‘Come here, I will show you the bride, the wife of the Lamb. And he carried me away in the Spirit to a great and high mountain, and showed me the holy city, Jerusalem, coming down out of heaven from God.’”

The third section has John “in the Spirit,” while one of the seven-judgment angels transports him into the wilderness. There he will hear the harlot’s sentence and witness her judgment. The harlot is drunk on the blood of the saints (17:6; 18:24) and intoxicates the nations with her passion to destroy (18:3), so that she deserves a double payback (18:6). Her destruction is sure because “the Lord God who judges her is strong” (18:8, 20). Heaven will praise God’s judgments against her (19:1-3). Her judgment ultimately comes from Christ who appears as the divine warrior (19:11-19).

The fourth “in the Spirit” section has one of the seven-judgment angels carrying John to a great high mountain. There he sees the vindication and reward of the saints (21:9-22:5). In their judicial reward they inhabit the strong, well-protected heavenly Jerusalem come down to earth.