WHY DID JOHN MEASURE THE TEMPLE? 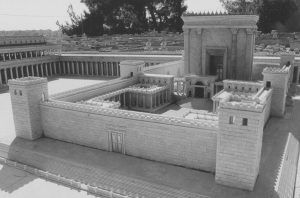 Revelation 11:2: “But exclude the outer court; do not measure it, because it has been given to the Gentiles. They will trample on the holy city for 42 months.”

These twin passages inform us that the “holy city/Jerusalem” will be “trampled” by the “gentiles” until the “times of the gentiles are fulfilled,” i.e., after “forty-two months.”

What of “the times of the gentiles”? Daniel 2 prophesies that four successive gentile empires (Babylon, Medo-Persia, Greece, Rome) will dominate God’s people: they are able to do so because they can strike at the material temple in the specifically defined land. Now after one final period of rage the gentiles will no longer be able to trample God’s kingdom, for it becomes universal and disassociated from a central temple (Eph. 2:19-21), localized city (Gal. 4:25-26), circumscribed land (Matt. 28:19; Acts 1:8), and distinguishable race (Gal. 3:9, 29). As Jesus puts it: “A time is coming when you will worship the Father neither on this mountain nor in Jerusalem,” but everywhere (John 4:21).

The Early Date of Revelation and the End Times: An Amillennial Partial Preterist Perspective
By Robert Hillegonds

This book presents a strong, contemporary case in support of the early dating of Revelation. He builds on Before Jerusalem Fell and brings additional arguments to bear.

But how do the “times of the gentiles” relate to the forty-two months (Rev. 11:2)? In late A.D. 66 Israel revolts against her oppressive Roman procurator Gessius Florus. By November the Roman governor of the Syrian province, Cestius Gallus, attempts to put down the uprising, but withdraws prematurely for reasons that are unclear (Josephus, Wars 2:17-22; Tacitus, Histories 5:10). A few months later Vespasian is “sent to Judea by Nero early in 67 to put down the revolt.” By August of A.D. 70 the Romans breach the inner wall of Jerusalem, transforming the temple and city into a raging inferno. From Spring of A.D. 67 to August of A.D. 70, the time of formal imperial engagement against Jerusalem, is a period right at forty-two months.

John “measures” for protection (Ezek. 22:26; Zech. 2:1-5) the inner temple (Gk., naos), altar, and worshipers (Rev. 11:1); the “outer court” is “cast out” for destruction (Rev. 11:2). The imagery here involves the protecting of the essence of the temple, its heart (appearing as the worshiping of God by his faithful people), while the externalities of the temple (the husk, the actual material property itself) perish. This mix of physical and spiritual is rooted in the very idea of the temple. For instance, in Hebrews 8:5a we read of an earthly “sanctuary that is a copy and shadow of what is in heaven.” The earthly, external is a copy/shadow of the heavenly spiritual reality. The “man-made sanctuary” is a “copy of the true one” (Heb. 9:24). In Revelation 11 God removes the shadow-copy so that the essential-real remains, which John here portrays as the worshipers in the heart of the temple.

This is much like Paul’s imagery in Galatians 4:22-26 where he contrasts “Jerusalem below” (literal, historical Jerusalem) with the “Jerusalem above” (the heavenly city of God). Or like the writer of Hebrews comparing historical Mt. Sinai that can be touched (Heb. 12:18-21) with spiritual Mt. Zion, the home of “the spirits of men” that “cannot be shaken” (Heb. 12:22-27). This mixture of literal and figurative should not alarm us, for all interpreters find such necessary from time to time. Literalist Robert Thomas, for instance, understands Revelation 19 to teach the return of Christ on a literal horse while urging that his sword and the rod are figurative (Thomas, Revelation 8-22, 387-389). And everyone sees a mixing of physical eating and spiritual eating in John 6:49-50 and physical resurrection and spiritual resurrection in John 5:25-29.

2 thoughts on “WHY DID JOHN MEASURE THE TEMPLE?”