TWO PHASES OF THE NEW CREATION 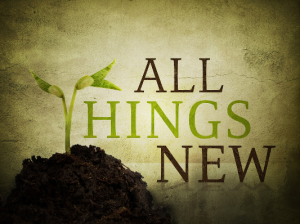 Christianity affirms the material order. In creation God made the physical world (Gen. 1) and man with a tangible body (Gen. 2:7). In redemption God effects the incarnation of Christ (Heb. 2:14) and his physical resurrection (Luke 24:39). We should not be surprised, then, that even in the consummation we will once again inhabit physical bodies (John 5:28-29) in a material environment (2 Peter 3:13). God has created us as men, not angels. As redeemed vessels of mercy we will inherit a glorious, perfect, physical realm when God refashions the world in the new heavens and new earth.

We find the fullest explanation of the glory of the consummate new creation in Revelation 21-22. But we cannot simply leap to the closing chapters of the Bible and expect to understand it properly. Revelation is the capstone of prophecy, not the foundation stone. Without adequate preparation for interpreting it, it can become a stumbling stone.

This principle of gradualism gives rise to the “now but not yet” principle in eschatology. For instance, our Lord established his kingdom in the first century. Not only did he declare “the time is fulfilled, and the kingdom of God is at hand” (Mark 1:15) but he stated quite clearly that “if it is by the Spirit of God that I cast out demons, then the kingdom of God has come upon you” (Matt. 12:28). Yet he also taught us to pray: “Your kingdom come” (Matt. 6:10). So then, the kingdom is present, yet it also is to come; it is now, but not yet.

We also see this principle at work in Christ’s subduing his enemies, which is one sense accomplished now (1 Peter 3:22) but in its ultimate sense is not yet (Heb. 10:13).

In the same way, God unfolds the new creation in stages. The new creation is now with us for: “if anyone is in Christ, he is a new creation. The old has passed away; behold, the new has come” (2 Cor. 5:17). Yet we are awaiting its final, corporeal establishment: “But according to his promise we are waiting for new heavens and a new earth in which righteousness dwells” (2 Peter 3:13).

“For behold, I create new heavens
and a new earth,
and the former things shall not be remembered
or come into mind” (Isa. 65:17).

This clearly was not speaking directly of the consummate, eternal order, for it still experiences birth, death, and sin at work (Isa. 65:20).

We must carefully establish these principles before engaging seeking to understand the nature of the consummate order for an important reason: Most of what we know from God’s word about the eternal order is by extension from the present order.

We indirectly discover the fullest insights from God regarding the final new heavens and new earth in Revelation 21 and 22. This passage opens with words clearly drawn from Isaiah’s prophecy regarding the new covenant kingdom-church: “Then I saw a new heaven and a new earth, for the first heaven and the first earth had passed away, and the sea was no more” (Rev. 21:1; cp. Isa. 65:17). We know that John is here speaking directly of the present order established in principle in Christianity because he concludes this vision noting: “And he said to me, ‘These words are trustworthy and true. And the Lord, the God of the spirits of the prophets, has sent his angel to show his servants what must soon take place . . . .’ And he said to me, ‘Do not seal up the words of the prophecy of this book, for the time is near’” (Rev. 22:6, 10). It was near to him nineteen hundred years ago.

Speaking directly of the eternal order to come after a long time (2 Peter 3:3-9), Peter points to the radical transformation of the present world that God will effect at Christ’s return: “the heavens will pass away with a roar, and the heavenly bodies will be burned up and dissolved, and the earth and the works that are done on it will be exposed. . . . The heavens will be set on fire and dissolved, and the heavenly bodies will melt as they burn! But according to his promise we are waiting for new heavens and a new earth in which righteousness dwells” (2 Peter 3:10-13).

The ideal realities that Revelation 21 and 22 portray in principle in Christianity may easily be extrapolated to and objectified in the consummate order — for that is the ultimate source from which he draws anyway (cp. Heb. 8:5; 9:24). We can now survey these characteristics in Revelation 21 and 22 directly applying them to our final state. Obviously human words and images strain to express our eternal condition, but they do provide glorious hints of its majesty.

With universal harmony and righteousness existing in the new earth, the redeemed will engage in cultural pursuits, just as God intended for Adam (Gen. 1:28; 2:15, 19). These collaborative pursuits will include even national distinctives: “By its light will the nations walk, and the kings of the earth will bring their glory into it . . . . They will bring into it the glory and the honor of the nations. But nothing unclean will ever enter it” (22:24, 26-27). That we will be organized as “nations” involving “kings” indicates that cultural variety and governmental endeavors continue. These, of course, will be without sin, for we will “walk by its light” and bring in “nothing unclean.”

And the bringing in of our “glory” strongly suggests that the earthly knowledge we gain in our present temporal labors will be useful and actually employed to the glory of God in the new world (as also suggested in the Parable of the Talents, Matt. 25:13-30). Indeed, John’s vision is based on Isa. 60:11:

“Your gates shall be open continually;
day and night they shall not be shut,
that people may bring to you the wealth of the nations,
with their kings led in procession.”

The earthly cultural wealth (experiences, skills, knowledge) of the nations will neither be dismissed nor forgotten, but employed in the eternal world — for “their deeds follow them” (Rev. 14:13).

God intentionally created us as physical beings with bodies adapted to a material environment, beginning with the creation of unfallen Adam. At the last day we will be bodily raised from the dead (John 5:28-29; 1 Cor. 15:12-25). In our eternal estate we will inhabit a purified, refashioned earth — something of a new Eden (Rev. 2:7; 22:2), but with no prospect of failure (as was inherent in Eden, Gen. 2:17). Truly, “Thine is the kingdom, and the power, and the glory, forever” (Matt. 6:13 NASB). And just as surely we have presently received the Holy Spirit “as a pledge of our inheritance, with a view to the redemption of God’s own possession, to the praise of His glory” (Eph. 1:14).

2 thoughts on “TWO PHASES OF THE NEW CREATION”