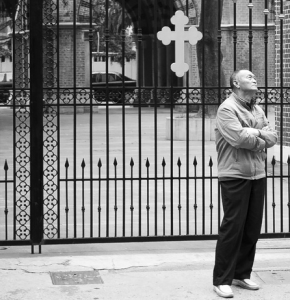 In a recent and rather long, written “debate” with Full Preterist leader and teacher Don K. Preston on Facebook, it has become clear to this theologian that Mr. Preston advocates a different version of Jesus than espoused by the Church.

First, some preliminary remarks. Mr. Preston teaches a view of Eschatology (or “end times” thought) that is called, Full Preterism. That is, every single prophecy that can be called a prophecy in the Bible is fulfilled within the generation of Jesus’ original hearers and followers. The culmination of this was the destruction of Jerusalem by the Romans (and their alliances) in 66-70 A.D. Much can be said about the importance of this event for biblical interpretation of prophetic events and has been said.

However, by and large, the message Preston brings is rejected within Christendom because it does not do justice to the “purpose of God” (Ephesians 1.11), which is seen as encompassing all human history from beginning to end. Preston utterly rejects the idea that the Bible anywhere speaks of the end of history or time. All Christian theology that has come down us and being worked out even today is based on the notion that time and history will end with the Jewish-Christian hope of a new heavens and a new earth (Christianity in Jewish Terms, 2000, Westview Press, xx).

It may seem entirely strange, indeed “bizarre” as one leading theologian put it, that someone professing the Christian faith would argue for such a proposal, but argue it they do. Although there appears to be no groundswell among its adherents, one would not get that from their constant appeals to the “success all over the world” they claim. This claim is not the point of my article. It’s the doctrine of Jesus. For Preston to make his claim, which in and of itself is outside the pales of orthodoxy for Roman Catholics, Greek Orthodoxy and mainline Evangelical communities, he has to redefine the nature of the Son of God as is commonly understood and believed.

First, then, allow me to define the Nature(s) of the Son of God (or, the Logos – Greek for “Word”). I will utilize three references so as to show complete unity of doctrine on this matter from Roman Catholic, Greek Orthodox and mainline Protestant (Evangelical) churches. First, the Creed of Chalcedon (451 A.D.): “We, then, following the holy Fathers, all with one consent, teach men to confess one and the same Son, our Lord Jesus Christ, the same perfect in Godhead and also perfect in manhood; truly God and truly man, of a reasonable soul and body.” It’s this last part that I wish to point out, “reasonable soul and body.” This is the Christ that Christians “confess” and believe. This is what is reflected when the Nicene and Apostles’ Creed states, “Who, for us men and for our salvation, came down from heaven, and was incarnate by the Holy Spirit of the virgin Mary, and was made man.” “Was made man” means, “a reasonable soul and body.”

Greek orthodoxy expresses the same sentiment, and the Westminster Confession, following this tradition-based-on-Scripture does the same, “On the third day He arose from the dead, with the same body in which He suffered, with which also he ascended into heaven, and there sits at the right hand of His Father, making intercession, and shall return, to judge men and angels, at the end of the world.” The phrase, “with which also he ascended into heaven” is to be noted. Thus, from this brief consideration Jesus, who is worshiped and confessed by the one, Holy Church is a man with a reasonable soul and body, with which body he ascended into heaven and sat at the right hand of the Father. The God-Man, Two Natures, One Person. Preston flatly denies this, and as we shall see, mocks it.

Now, to be fair, Preston acknowledges that the Son of God, the Logos, the Eternal, Uncreated Son, who is God the Son, became a human being (“flesh”) and had, had, mind you, a body. However, this body was “shed” at his ascension recorded in Acts 1, and what remains of his human “nature” is not that which is “of the same substance with his Father according to his Divinity, and of the same substance with us according to his humanity; for there became a union of two natures. Wherefore we confess one Christ, one Son, one Lord.” As of the “substance” with us, Preston changes this. The “nature” of Christ as it presently regards his humanity is merely the retaining of the “knowledge and understanding” (memory) of his days in the flesh.

In the “debate” with Mr. Preston I pressed him over and over to answer a question concerning this matter, “did the man, Christ Jesus, die twice?” Preston would not answer the question but rather went on with pointing out my inconsistencies about all matters eschatological. In other words, Eschatology, as we shall see, controls the entire doctrinal catalogue of Christian Theology proper. Everything is read through the lens of Full Preterism. It’s not that I cannot answer Preston on exegetical matters concerning Eschatology, it’s that in my view, Christology is more important than Eschatology. If we can’t get WHO we worship correct (Christology), then it matters not about WHAT he has done or will do (Eschatology). Mormons also say, “Jesus is Lord”, but when you ask them, “Who is Jesus” you get an entirely different answer than you would from the Church. For Preston, this is not so important as is the matter of Eschatology. If you get Eschatology wrong, then you get all the other doctrines wrong (and, he admits, as we shall see, that the Church has, basically, got it all pretty much wrong because her Eschatology is, pretty much, all wrong).

Allow me to let Mr. Preston speak for himself. “I want everyone to pay particular attention here. We have Mr. Frost offering this: “I could care less who you think Babylon is….but, “who do you say that I am?” THAT’S fundamental to me. FAR more important than your eschatology. But, if your eschatology gets you to deny the Continued Incarnation of our Holy Lord, then it is WRONG, period, end of story.”” Yes, I wrote that. I do not care what Preston thinks concerning his identification of Babylon in Revelation 17. I do care about the identification of Babylon, just not his, and I note that (which he takes to mean that I have no care at all about who Babylon is in Revelation 17, but that’s not what I said, even in his quote from me!).

The Christ of the Prophets (by O. Palmer Robertson)
Roberston examines the origins of prophetism, the prophets’ call, and their proclamation and application of law and covenant.

From my quote, Preston goes on: “Folks, here we have a man openly– overtly- scoffing at Biblical doctrine and truth. Scoffing and MOCKING the importance of properly understanding the identity of Babylon! Sam Frost does not care who Babylon was, in spite of the fact that I have shown, the coming of the Lord, the judgment and the resurrection were to occur at the destruction of Babylon! So, to mis-identify Babylon is to miss- to negate- to pervert, the Biblical narrative of eschatology! But, Mr. Sam Frost does not care! Instead, all he cares about is MOCKING the Biblical, exegetical arguments about the heavenly existence of Jesus.” Again, that’s not what I am “mocking” (actually, I am not mocking anything). I said, I do not care what Preston thinks about his interpretation of Babylon, not about who Babylon is (I have my own opinion on that). But, Preston is right on this matter: I do care about the mocking of the present heavenly existence of Jesus, who I worship. Correct.

I’ll let all of that slide, for Preston is prone to self-importance. In this last quote he admits that my position is, in fact, “creedal.” Thus, my position, which is in full creedal agreement with the Holy Church, Greek, Roman and Protestant Evangelical on this matter of Jesus’ heavenly existence is “misguided”. Further, Preston writes, “Mr. Frost says that I MOCK, the doctrine of Christ and his body. No, Mr. Frost, I simply reject your distorted view of Christ’s body.” My “distorted view of Christ’s body” as it is in heaven is “creedal”. Therefore, by strict logic, the creedal view is “misguided”, “distorted” and to be “reject[ed].” This is as clear as an admission as one can get: Preston’s Full Preterism rejects the creedal doctrine of Jesus’ continuing Incarnate body….