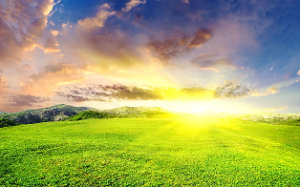 Ask of Me, and I will surely give the nations as Your inheritance, / And the very ends of the earth as Your possession.

Amillennialists often object to postmillennialism’s use of this verse. They complain that postmillennialists apply the terms ‘nations’ and ‘earth’ in a way that Jesus and the apostles never intended: as political entities. The amillennialist argues that the NT teaches that Christ’s making the nations and the earth his footstool simply refers to the salvation of scattered Gentiles from every tribe tongue and nation, not Christ’s influence on political structures, etc.

The Glory of Christ (book by R. C. Sproul)

From the angels’ revelation of Jesus’ glory to the shepherds outside Bethlehem,

to Jesus’ life-changing revelation of His glory to Paul on the Damascus road, Sproul guides us to a deeper understanding of Christ’s glory.

How shall the postmillennialist respond?

First, we must be careful not to throw out all literalism just because dispensationalism wrongly uses it. Literalism may be abused, to be sure. But many verses must be interpreted literally. So charging postmillennialism as a simplistic, naive, dispensational-like eschatology is simply name-calling. I

Second, I don’t see the problem with using Psalm 2:8 as evidence of postmillennialism. That is, I don’t understand what the issue of “political entities”/ “political structures” has anything to do with the amillennial/postmillennial debate here. Even setting aside the idea that particular political entities are in view here, the fact remains that the psalm declares that Christ will make “the nations” (whatever they are) and “the very ends of the earth” his possession. He is not speaking merely of scattered converts here-and-there from out of the nations. Rather he seems clearly to be speaking of vast influence over all the nations and even to the very ends of the earth. The psalm appears to be speaking of some sort of global dominance.

Third, nevertheless, I would note that David does call upon the kings and judges of the earth to do homage to the Son (Psa 2:10-12). It seems he goes to great lengths to speak of not only people in general but even their political rulers and judges.

Fourth, besides all of this, reducing the significance of Psalm 2 would not affect the broader argument for postmillennialism. Postmillennialism is not a “one text” eschatological system (as premillennialism tends to be with Rev 20).